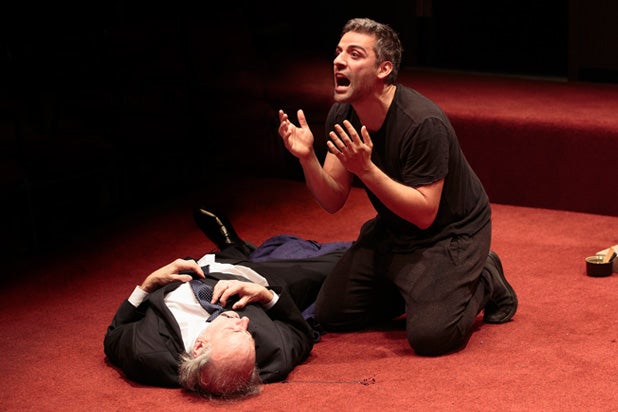 “Earthy” is the word to describe director Sam Gold’s staging of “Hamlet,” which opened Thursday at the Public Theater.

Literally, there are the huge mounds of dirt that Ophelia (Gayle Rankin) retrieves from two potted plants she finds in the theater lobby, and pours over the dead body of her father, Polonius (Peter Friedman) and from which she fashions her own premature grave.

More figuratively earthy is the upstage restroom that most of the characters find themselves in need of at various moments in the drama, although only Polonius is actually seen taking a dump there. The production is so replete with the sounds of a flushing toilet that you almost expect Ophelia to drown herself there. She doesn’t.

Despite how frequently we all dispose of our bodily waste, it’s a function that hasn’t occupied a great deal of stage time over the centuries. Certainly not in my theatergoing experience. “Ubu Roi” comes to mind, but little else.

Gold definitely sees “Hamlet” as a very base family drama, if not exactly a tragedy. When Hamlet (Oscar Isaac) feigns madness, he clearly signals his state of mind by running around on stage in his black skivvies for much of this production’s four-hour running time.

Yes, four hours. And an intriguing, if not always riveting, four hours it is. The evening unfolds in fits and starts, and the best way to approach this “Hamlet” is to sit back and enjoy the outrageousness. When Gold’s imagination fails him during most of the Bard’s soliloquies, you can listen to the poetry and simply wait for the director’s invention to return. It does, and gathers force in the second half.

After Gold’s recent revivals of “Othello” and “The Glass Menagerie,” New York theatergoers know if they love or hate the director, and the latter should just stay away from his radical reinterpretations. His “Hamlet” doesn’t have the tight visual cohesion of those two earlier efforts, but having seen this take on the Dane you’ll never be able to watch the Olivier version with a straight face. Or perhaps any other version you once admired.

The double casting of the remarkable Ritchie Coster as the ghost of Hamlet’s father and Claudius amps up our troubled hero’s Oedipal impulse, and reinforces it with triple casting during the Mousetrap, the play within the play, that proves as hallucinatory for the audience as it does for Hamlet.

Gold knows his comic relief. The “murder” of the Player King is so hilariously performed by Keegan-Michael Key (who also essays Horatio) that you can almost not regret never having seen Charles Ludlam’s “Titus Andronicus” in Central Park. (Assigned the project by the Public’s Joseph Papp, Ludlam passed away before staging it.) Best of all is Gold’s double-casting of the gravediggers; it’s so deliciously theatrical and unexpected that the actors’ names cannot be revealed here.

As with any radicalized “Hamlet,” the director wins some, loses others. When it comes to Shakespeare, Gold likes to mix up classically trained thespians with those who mangle the text, often for comic effect. Rankin’s sullen, tone-deaf Ophelia is clearly Polonius’ daughter, but making her so complicitous robs Hamlet of any real grief when she offs herself.

Everyone else on stage looks like he or she just jumped out of bed, especially the callipygous Isaac when he strips down to his underwear. There’s a real disconnect between Isaac’s often ridiculous appearance and the poetry that he speaks with absolute command of the language. From the neck up, he’s almost a textbook Hamlet: very romantic, brooding and perplexed. His spirit soars. From the waist down, however, he’s stuck on earth. Maybe that’s the point.