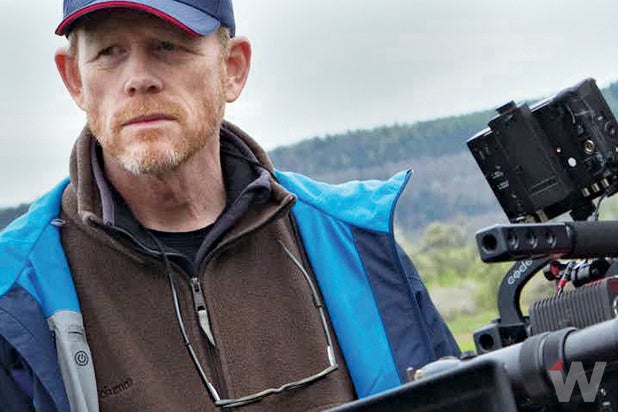 The new photo appears to have been taken on a dusty surface, with a lot of what appears to be junk piles.

Neither of these things is new to the “Star Wars” saga, but their appearance in the Han Solo film suggests a deeper look into the criminal underworld of the Galactic Empire.

Shooting a scene about desperate and dangerous times in the Galaxy pic.twitter.com/AtNZPOkzFO

Plot details are being kept under wraps but the film is set to chronicle the young Han Solo from age 18-24 and will include meeting Chewbacca and finding (or perhaps winning) the Millennium Falcon.

Howard stepped in to direct the Han Solo movie last month, just two days after Phil Lord and Chris Miller were let go from the “Star Wars” spinoff. The directors had been at the wheel of the film, starring Alden Ehrenreich in the role that Harrison Ford made famous, for nearly two years.

Physical production commenced in late January in the U.K., and the men completed nearly 17 weeks of shooting through May.

The film is still set for a May 2018 release. It will star Ehrenrich, Donald Glover, Emilia Clarke, Thandie Newton, and Woody Harrelson.