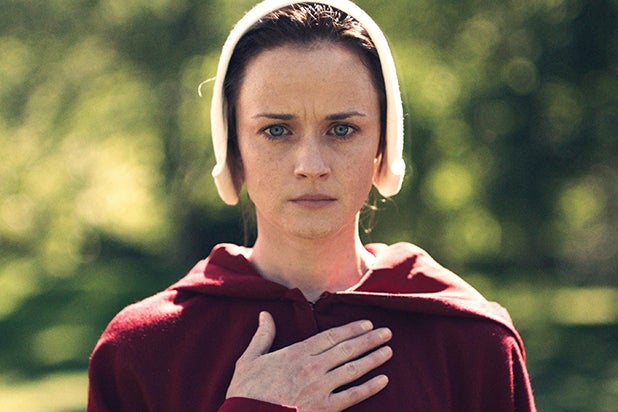 “The Handmaid’s Tale” had an instant impact when it debuted on Hulu on Wednesday night.

And for once, the reactions on social media about the streaming drama based on Margaret Attwood’s dystopian novel were surprisingly intelligent and educated.

“‘This will become ordinary’ — when the banality of evil stops being a dystopia and instead becomes the evening news,” one Twitter user said.

Not surprisingly given the current political climate, many compared the totalitarian theocracy set in a near-future New England to life in the U.S. under the Trump administration.

“Just to be safe, let’s keep Mike Pence from watching #HandmaidsTale,” another user said, referring to the vice president.

“The #handmaidstale is basically what would happen if #mikepence was president for 12 minutes,” quipped another.

“Instead of lamenting how ‘timely’ #handmaidstale is, how about we work extra hard to NOT be like The Handmaid’s Tale? C’mon,” was a another response.

Also Read: Elisabeth Moss on Why She Became a Feminist: 'Our Generation Has Taken Our Rights for Granted' (Video)

Based on a seminal 1985 novel by Margaret Atwood, “The Handmaid’s Tale” centers around a servant in the household of a high-ranking official in a totalitarian society called Gilead. Being one of the few remaining fertile women in Gilead, she is forced into sexual servitude.

#HandmaidsTale is perfection and Margaret Atwood is a genius.

The scariest thing is we are not too far from this dystopian society. And around the world, it is a reality. #HandmaidsTale

Why were we reading David Copperfield in high school instead of #HandmaidsTale?

Skimming through @MargaretAtwood's Twitter timeline is comforting while watching #HandmaidsTale.

#handmaidstale is great great television. Riveting, raw and too real.

In related news: I may never sleep again. pic.twitter.com/35vBBctxnH

"I was asleep before, that's how we let it happen. When they slaughtered congress we didn't wake up. #HandmaidsTale #dystopiaTOOreal

Started watching The #HandmaidsTale b/c the internet promised me lesbians, instead I got a vision of the America Mike Huckabee yearns for

The #handmaidstale is basically what would happen if #mikepence was president for 12 minutes. @HandmaidsOnHulu

Most terrifying line in #handmaidstale was "after a time, this will be ordinary."

Everyone: OMG #HandmaidsTale is so scary!
English and Gender Studies Majors: YEAH WE EFFING KNOW