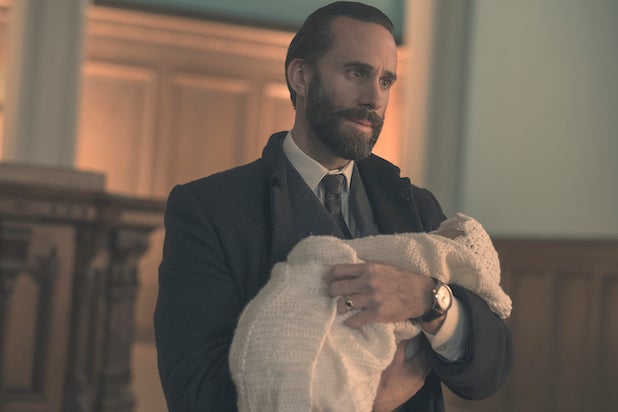 Let’s get this straight right away: Joseph Fiennes knows Commander Fred Waterford is not a good guy. And he also knows it’s not his job to make you like his “Handmaid’s Tale” character.

But it is his job to “find pockets of humanity” in one of the “monsters” and “warped creatures” that inhabit the fictional world of Gilead, created by Margaret Atwood in her dystopian novel and now elaborated on in Season 2 by the Hulu adaptation’s creator, Bruce Miller.

“It’s a constant struggle with an antagonist like Fred,” Fiennes, whose first-ever Emmy nomination was one of eight acting noms for the show that won eight Emmys last year, including Outstanding Drama Series, tells TheWrap.

“One is never looking for sympathy, but one is looking for pockets of humanity,” he added. “And when I say humanity, I mean making him human and that’s difficult ’cause he is in many ways used as a device to show and illustrate the painful reality of Gilead.”

“So it’s about balancing and looking at the monsters like Fred and talking about how even those warped creatures like Fred, we have to start to look at them in the human complex, because they surround us in the real world,” Fiennes said. “And I think a lot of what we’re doing is a reflection of the real world. So I sort of welcome the prying out of the ugly components of the male psyche. “

In the second season of the “Handmaid’s Tale,” Fred moved further and further into villain territory, with his acts of emotional and physical abuse against Offred (Moss) and his wife Serena Joy (Strahovksi). But he also became a father — if you count taking the baby he assumed to be his and Offred’s to raise with Serena — who appears to genuinely love his daughter. And those conflicting storylines make for a more and more complex character for Fiennes.

“If there is a way to find the nuance and a multifaceted Fred, I search for that as much as I can,” Fiennes said. “But he has gone darker and I would love to look at a Season 3 where he doesn’t have to play the darkness because we know the type of creature he is already.”

But the Emmy nominated-series is based on “an extraordinary feminist novel,” Fiennes says they “want to keep authentic to that” and that’s why it’s “a delicate call to start investigating the male psyche in depth.”

“There is that balance between an extraordinary protagonist and all of the complexities of the female dynamics in different aspects and different characters,” Fiennes continued. “Investigating that, that is the importance of the show and what they are resisting and how they find their inspiration and how we understand their pain and their confusion and their contradiction. And if you start hooking that up with someone like Fred, I welcome that. But I think it’s a balance that is led by the writers.”