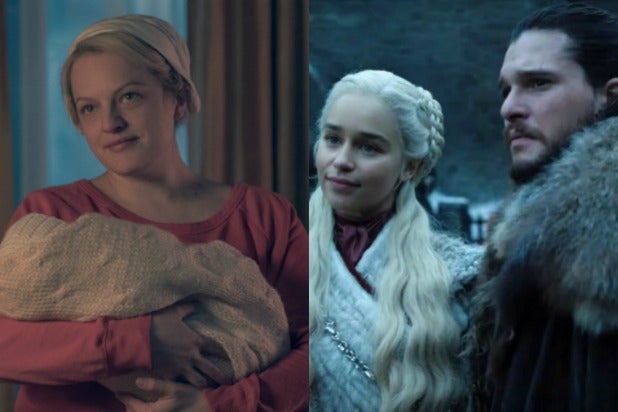 And according to Hulu’s Senior Vice President of Originals, Craig Erwich, the decision to push the start of Season 3 to June — which will make it ineligible to compete in the 2019 Emmys — has nothing to do with when “GoT” comes back with its final batch of episodes — which will be eligible, due to the HBO series’ April 14 premiere.

“No, um, it doesn’t,” Erwich told reporters at the Television Critics Association press tour Monday, when asked if the return of “GoT” was affecting the return of “Handmaid’s Tale.” “You’re gonna watch the final season of ‘Game of Thrones,’ as well,” he added. “It simply was, we wanted to give the show as much time as possible to maintain the quality that it has. I can tell you, and I think [creator] Bruce [Miller] and [executive producer] Warren [Littlefield] will come out, maybe at a later date, I’ve had the chance to see the first two episodes of ‘The Handmaid’s Tale’ and it’s spectacular.”

As to whether Hulu intentionally pushed “Handmaid’s” Season 3 start to take it out of the running for the Emmys, Erwich said: “You know, maintaining the quality of the ‘Handmaid’s Tale,’ which is impeccable, takes time. And we wanted to give the show enough time in Season 3 to maintain incredibly high standards of storytelling that were set in Season 1 and 2. It will have the effect of the Season 3 episodes, all of them, being eligible for being viewed by the Emmy award body when the show is qualified.”

“The Handmaid’s Tale” will return with three new episodes at once on Wednesday, June 5. Subsequent episodes will be released every Wednesday.