(Warning: This post contains spoilers for Episode 407 of “The Handmaid’s Tale,” titled “Home.”)

The fourth season of “The Handmaid’s Tale” has been building to the pivotal moment we get in Episode 7 — and we’re not taking about June’s (Elisabeth Moss) full arrival into the safe arms of Canada. While that is certainly a plot development that has allowed fans to breathe a sigh of relief, the scene we’re talking about is the very satisfying face-to-face between June and Serena Joy (Yvonne Strahovski), where the tables have finally turned in a way that allows June to take down her former captor who is currently imprisoned for her crimes.

“I think it was written intentionally to echo the scene in the first season where I threw her down on the ground and I get in her face and I scream. I remember that scene and I screamed, ‘Do you understand me?’ And she echoes the same line back to me in this scene,” Strahovski told TheWrap. “But it was kind of strange because I think Elisabeth and I are so used to working together much more. So this year, it was very different for us. And this was the first time we had really come together as actors this season. I think the audience is highly anticipating this moment where they’re back together again and their strange relationship and how it’s unfolding. And I think it was kind of the same — I mean, I’ll speak for myself, for me to kind of have that moment again that we’re so used to having, but we hadn’t had this season up until this point.” 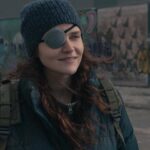 It was definitely a moment many episodes in the making, and well worth the wait to see June threaten Serena in a way that we’ve never experienced before — especially because of how hard it really hits Serena, who is with child at this moment.

“It’s really moving,” Strahovski said. “There’s so many things going on in the scene. I’m not sure that we’ve ever seen pure, absolute venom from June to this level. And I loved in the moment when we were facing each other doing the scene, I thought that was incredibly impactful in the moment. And I love that Serena, this is the first time you’ve really kind of seen her begging for something. But again, the complexity of what’s behind the begging is, what was interesting to me is, I’m not sure that she’s genuinely, truly begging. I think there is definitely an element of that. But I think in true Serena fashion, strategy is always her motivation. And I think strategy has a lot to do with this moment of begging for forgiveness.”

But part of that fear we do see is certainly real on Serena’s part, especially when June wishes death upon Serena’s unborn baby.

“She really, intentionally gets her exactly where she knows it’s going to hurt and where she’s vulnerable — and she’s playing on Serena’s fears,” Strahovski added. “I mean, I don’t doubt that Serena has probably sat there and thought the same things. I mean, that was one of the reasons why they found Gilead in the first place, because of birthrates and problems with some children dying, essentially. And of course it’s crossed Serena’s mind that she may not have a successful birth and that her child may not even come to full term. And all the things that you worry about as a mother who’s carrying a child. And it really hits her where it hurts the most.”

Another episode of “The Handmaid’s Tale” Season 4 drops next Wednesday on Hulu.