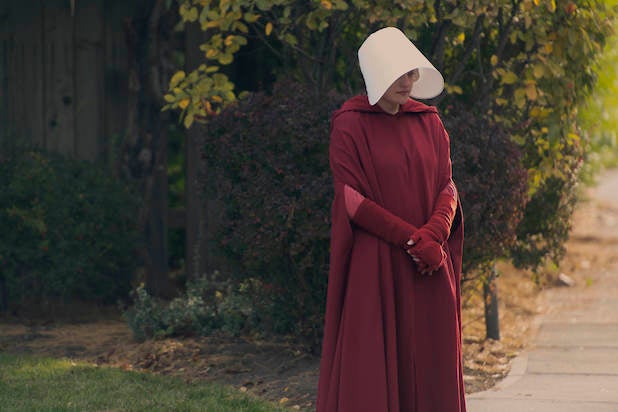 “The Handmaid’s Tale” launches its third season Wednesday, reintroducing viewers to the dystopian world of Gilead and all of its reproductive (and reproductive rights) problems. But for those of us living in the real world, it might actually have been impossible to forget about the Elisabeth Moss-led Hulu series during the stretch since its Season 2 finale last July.

That’s because the TV adaptation of Margaret Atwood’s novel regularly gets free promotion via protesters who have taken to wearing the iconic red-and-white uniform of the show’s imprisoned baby makers.

And it’s the decision to use the Handmaid costume to fight for reproductive rights that “Handmaid’s Tale” creator Bruce Miller tells TheWrap “fascinates” him.

“It’s funny, because it’s a protest for freedom by showing someone who is not free,” Miller said when we asked him what his personal feelings were on the Handmaid’s uniform being utilized so often to protest anti-abortion laws, amid the growing number of states that have passed “heartbeat bills.”

“I think it’s fascinating, because a Handmaid and a Handmaid costume is so complicated,” the Hulu TV adaptation’s boss told us. “You know, it’s about reproductive rights, it’s also just about autonomy of your body in general, it’s also about servitude, sexual servitude, rape — it’s all of these things. And it just fascinates me that people have latched on to that image.”

“Really, it’s a testament, first of all to Margaret, who created it originally, but also Ane Crabtree for introducing the design and our costume team, who made it so simple and iconic,” Miller continued. “You know, I’m flattered and stunned because it’s kind of an amazing thing and hard to get your head around.”

But flattery will only get you so far with Miller, because he still gives Atwood the main credit here for creating  this imagery for protesters to latch onto in the first place.

“The Handmaid’s Tale” Season 3 launches with its first three episodes Wednesday on Hulu.