A version of this story about Bradley Whitford first appeared in the “Race Begins” issue of TheWrap’s Emmy magazine. It is one in a series of conversations about the effects of the coronavirus on the TV industry.

It’s been almost a year since Season 3 of “The Handmaid’s Tale” premiered on Hulu. Star Bradley Whitford, along with the rest of the cast and crew of the Elisabeth Moss-led drama, has been eagerly awaiting his return to Gilead. But just as that journey was beginning on location in Canada, COVID-19 started to spread across North America.

TheWrap spoke with Whitford last month amid production shutdowns for almost every TV series shot in the U.S. and Canada, and many other countries around the world, about the future of “The Handmaid’s Tale” — and TV in general. While California has been given the go-ahead to resume film and TV production later this week, the industry anticipates many changes that will need to be made across the board, including some that may still be unknown. As are the long-term effects the coronavirus will have on the entertainment industry.

How was “The Handmaid’s Tale” affected by the pandemic?
It was very bizarre. I had been talking to some friends in the political world just before going up to shoot on March 3. And they were saying, “This virus is going to be a really huge deal and you might not want to go up to Canada, you might get stuck up there,” which surprised me. But everybody was traveling, and I went up. It was funny, I was in my Lawrence getup and reading on my phone for the first time about making sure you wash your hands, and whatever you do, don’t touch your face. And while I was reading it, three different people touched my face, as they do on sets. And I’ve talked to Lizzie (Elisabeth Moss) and we just want to get back. I don’t think Lizzie or I are people who have taken our opportunities for granted. So the idea of being able to walk onto that set and have that writing with those actors and actually be together and look into Lizzie’s eyes and find out where this weird scene goes is something I think we’re all starving for.

Are there conversations about when you will go back and what the future will look like?
It’s very day to day. Ontario just extended its border lockdown with the United States, which I think has to do with the unfortunate casualness with which our administration is dealing with this. There’s a lot of talk about fewer people on set, which is heartbreaking because we live with those people and those people need jobs. I’ve heard talk of us all moving into a hotel for 14 days, the cast and the crew, and being totally isolated. And it gets complicated. A lot of the actors, like me, I fly back and forth because I have a family. And that may be different. When we go back, we may not have that luxury. My agent said there may be a quarantine even if they open up the border. So if you were going to work, you’d have to get there two weeks early, and then you’d probably be quarantined coming back. I mean, nobody understands how this is going to play out.

I do think we will find a way. I think it’s going to exacerbate a very painful recession in Hollywood. I think there’s going to be a lot of demand for material, but I think the precautions we’ll need to take will probably add 30% to every budget. Everybody is losing money, and everybody who has ever negotiated with a studio knows that they always claim poverty. I’m afraid it will make them make fewer television shows, fewer movies. It’s concerning to me. 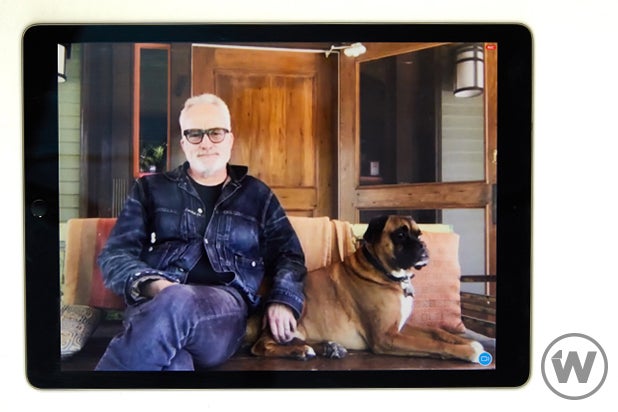 What do you see as TV’s role in this time of isolation?
There’s this fear of, “Oh, there’s too many television shows and I can’t keep up.” And I’ve never thought that was a bad thing. I think our ability to select different kinds of shows is just developing in the same way bookstores began to appear. You were never going to be able to read all of them, but there was this incredible, phenomenal variety going on.

It’s really incredible — when we were first making “The West Wing,” they didn’t even have VHS collections. When we made that show at the beginning, the only time it would possibly be on again was in a summer rerun. If you wanted to see The West Wing ever, you would have to make an appointment at the Museum of Broadcasting in New York. And it is so weird to bump into young people that have memorized episodes that I never learned the name of. I’m sort of glad we didn’t know that streaming was going to exist, because I think it would have made us really nervous.

Your character, Commander Lawrence, and June (Moss) have had a very complex dynamic since she first met him, this architect of Gilead, and then became his handmaid. How did you navigate this story?
It’s a fascinating relationship. This situation is the most complex and this character is the most interesting guy I’ve really ever been able to play. I’ve always thought of him as a guy named Robert McNamara, who prosecuted the war in Vietnam, who was a brilliant economist, a business guy who revolutionized car making and then took all of his brilliance and systematically killed a couple of million people in Southeast Asia and later struggled with it. I’ve always thought of Lawrence as a guy who similarly has a huge brain that has obliterated his humanity. What we see in him is his humanity peeking out. And that’s the struggle. That’s why he connects with June in the first place. And that’s why he’s tough on June, which can seem really inconsistent, but he’s going way out on a limb here and he needs to know he can trust her.