(Warning: This post contains spoilers for Episode 408 of “The Handmaid’s Tale,” titled “Testimony”).

After facing June (Elisabeth Moss) in private on last week’s “The Handmaid’s Tale,” Serena Joy (Yvonne Strahovski) was forced to once again confront her victim on Wednesday’s hour — but this time in a courtroom full of people listening to June list the atrocities that Serena and her husband, Commander Fred (Joseph Fiennes) Waterford, committed against June while holding her captive in Gilead.

The scene in which June recites Serena and Fred’s crimes in her testimony also includes Fred firing back at June’s allegations — which the audience knows to be true — and Serena doing her very best to look like the innocent, pregnant wife. While that act might not work on “Handmaid’s Tale” viewers who know what the Waterfords are capable of by this currently airing fourth season, it is working in-universe, as the couple walks out to their car at the end of the episode to find a large cheering crowd supporting them in their legal battle.

“I remember reading it and thinking, ‘Oh, my God — why is there a fan club?’ And then catching myself, thinking, ‘Oh, of course.’ I mean, this is totally what is happening in real life,” Strahovski told TheWrap. “There are fan clubs for all kinds of things and all the things we’ve seen, all the kind of extremist behavior out there, there’s a fan club for it. And it’s confronting, honestly.” 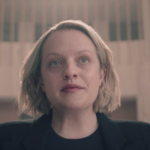 There are two episodes left in “The Handmaid’s Tale” Season 4, with a fifth season already ordered at Hulu. While Strahovski was not about to give anything away, she did tell us this in regards to where the season finale will take us:

“I’m going to go as far to say I feel like this season finale might be the most satisfying one yet. I personally feel that way. I remember reading it with my jaw on the floor, just thinking, ‘Oh, my gosh, this is going to be epic.’ And epic it is. So it’s very hard to talk about it without spoiling anything, but I think that’s all I can say. Yeah, the satisfaction factor A++.”

A new episode of “The Handmaid’s Tale” Season 4 launches next Wednesday on Hulu.