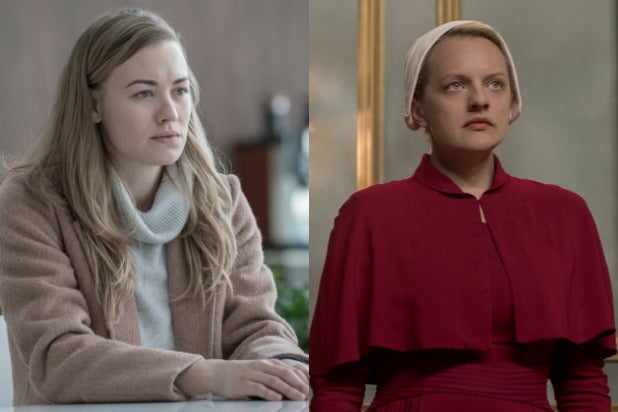 Oh, June, what have you done?

Wednesday’s episode of Season 3 of “The Handmaid’s Tale” ended with June (Elisabeth Moss) standing behind Serena Joy (Yvonne Strahovski) and Commander Fred Waterford (Joseph Fiennes) as they made a televised plea for baby Nicole — June’s biological daughter, *their* daughter by the laws of Gilead — to be returned to them by Canada. This twist came after Serena had promised at the top of hour, titled “Unknown Caller,” that if June agreed to help coordinate a goodbye visit for Serena with the baby, who is being cared for by June’s husband Luke (O.T. Fagbenle), that she would be able to finally let go.

Of course, that plan went out the window once Serena met with Luke in Canada and held Nicole, the little girl she had given up to June to get to safety at the end of Season 2, and changed her mind about wanting her back.

Strahovski told TheWrap how this wasn’t what Serena intended to happen all along, but that her character was more than willing to go there once she saw the baby again and her husband offered to fight to retrieve her.

“She sees Nicole and kind of explodes emotionally, privately,” Strahovski tells TheWrap. “And I think it’s in the time between getting back on the plane and seeing Fred, I think she knows that is what she wants to happen already. And Fred saying that to her as she gets off the plane is just perfect for her. She’s like, ‘Great, Fred will do whatever I want right now and this is what I want. And Fred thinks it’s his idea, so that’s even better.’ She didn’t have to convince him because, at this point, Fred will do anything for Serena, really, because he’s trying to mend the relationship.”

“So in an awful turn of events, Serena’s heart is winning over her mind and she does this awful 180,” she continued. “And this is much to June’s dismay, because June has been planting those seeds in the first few episodes about how Serena can use her power for good and be part of a resistance of some kind. And it just backfires and now she’s going to use her power to bring baby Nicole back.”

And in the moment that June is standing behind the Waterfords with her head bowed as they beg Canada via telecast to return Nicole to Gilead, Moss tells TheWrap she “100 percent, absolutely” regrets agreeing to help Serena.

“Oh, yeah, I mean she really does,” Moss said. “And it’s such a betrayal on Serena’s part and it’s so incredibly disappointing to her. And June says to her, you know, June says, ‘It’s not going to be what you think.’ That’s what she says in the scene, ‘It’s not going to be what you think.’ And for God’s sake, she’s the only one who has actually had the experience of seeing her daughter and not being able to take her with her. She knows the effect that’s going to have on Serena.”

“But one of June’s greatest strengths is also her greatest weakness, which is she believes in people and believes in the good of people and believes someone will do the right thing and that’s just not always the case,” Moss continued. “It’s a wonderful quality to have to believe that, but it could also get you into trouble because people don’t always do the right thing. I think it was a big mistake on her part, which she definitely regrets.”

As for shooting the actual episode, which involved June and Luke speaking to each other over the phone for the first time since they were separated when she was captured to become a Handmaid, Moss broke down how they shot the scene, with Fagbenle standing in the room off-camera.

“We wanted it to feel like he was in the room, we wanted it to feel like she was talking to him, like she was looking at him across the room,” Moss said. “We wanted to have that sense of intimacy. And it was one of my favorite scenes and one of my favorite episodes. It’s a love story, that episode is about love and it’s just beautiful. The idea that she has so much that she wants to say and so much that she wants to be able to communicate to him, but it doesn’t matter, she has to get him to agree to do this one thing and that’s the only thing that matters and she’s trying to hold it together. I just love that scene.”

Strahovski’s scene with Fagbenle was much more tense than intimate — but an equally important one for the Hulu series, as it saw Serena fulfill June’s request she hand off a package to Luke, which ended up containing a tape with a recorded message from June to her husband.

“I just think this is such a time for Serena,” she continued. “We’re seeing her unravel over these first five episodes in Season 3 and she doesn’t know where to look and what to do. She’s not thinking straight in the way she normally does in her manipulative ways. I’m not sure that she has even thought through that particular decision and is probably just riding on gut instincts.”

New episodes of “The Handmaid’s Tale” launch Wednesdays on Hulu.