(Warning: This post contains spoilers for Episode 306 of “The Handmaid’s Tale,” titled “Household.”)

Pardon the pun here, but it must be said that Serena (Yvonne Strahovski) was feeling pure joy on Wednesday’s episode of “The Handmaid’s Tale,” as she and her husband Commander Fred Waterford (Joseph Fiennes) dragged June (Elisabeth Moss) to the Gilead-ified Washington, D.C. in their continued efforts to get baby Nicole back from Canada.

This version of our nation’s capital was somehow even more horrifying than the areas of the Hulu drama’s dystopian world that viewers have seen so far. June was in hell with a piece covering her mouth added to her Handmaid uniform. Meanwhile, Serena was in heaven while experiencing what life could be like for her and Fred in D.C.

Strahvoski tells TheWrap all of this has Serena rethinking her chilly attitude toward her husband.

“I think [there is] the possibility of a fresh start for Serena,” Strahovski said.  “This is not something that she really ever thought of, and certainly not in all of her emotional turmoil did she think there was this other avenue they could go down and have this fresh life. And it’s really the first time she’s considering that maybe she could mend things again with the Commander, which is just awful after everything that he has done to her that she would even consider that. But she does.” 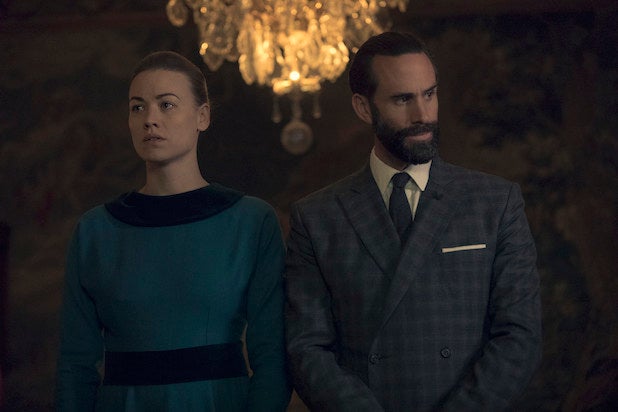 When Serena and Fred take June to D.C., they stay with Commander Winslow (Christopher Meloni) and his wife Olivia (Elizabeth Reaser) who have a total of six children in this world where it’s hard to even come by one. And after pulling a 180 on the last episode by deciding she wanted Nicole — her daughter by the laws of Gilead but June’s by birth — back, she’s definitely thinking about the “fantasy” of it all.

“I think it’s just so idyllic the life with this new commander, these two new characters that we meet and all the children,” she continued. “I don’t think she ever thought [she and Fred] could possibly have that many children and her life could feel complete and whole in this elevated world of D.C. And she kind of allows herself to fall into the fantasy and indulges herself  in playing that out in her mind a little bit.”

Strahovski says viewers will see a little bit more of that in the next few episodes as she toys with this idea. “And it just would be nice, wouldn’t it, if everything could turn out so perfectly?” Strahovski says. “But we all know that Gilead doesn’t work that way. So I guess Serena has to to entertain the fantasy for a little bit and see where it goes.”

The closing moments of the episode saw a huge blowup between June and Serena in which the two women who have arguably the most complicated dynamic on the Bruce Miller-created series officially called it quits on their ambiguous relationship after spitting out a few nasty words at each other.

“At this point, they’re pretty done, you know? And this is definitely like the breakup scene because their relationship is like such a dysfunctional lovers’ relationship, really,” Strahovski said. “They’re so up and down, they quarrel all the time, and it definitely felt like a breakup.” 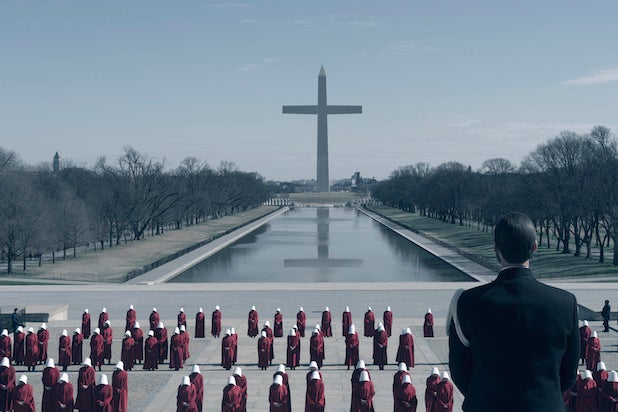 “It was very important to me, and something Lizzie and I talked about with Bruce at the start of the season, that the dialogue between them should feel very raw this season and very unfluffed,” she told us. “There shouldn’t be any fluffy bits and concealing things, because they’ve just been there and done that. They know each other so well, they’ve manipulated each other and they can see through each other. So it really was important that it felt very brutal and raw.”

Among the “brutal” words said between the two are June telling Serena she “can’t love,” and that she’s “small,” “cruel,” and “will always be empty,” then Serena telling June she “should have put that ring in your mouth the day we met” and June firing back she “should have let you burn when I had the chance.” Strahovski said these things are “really awful,” but still true.

“We’ve seen these two go through so much and this is now where they’ve landed and this is how they speak to each other,” she continued. “And really, the things they say to each other at the end of that scene are really awful, but it’s how they feel and it’s the truth. And they both feel hurt by each other.”

As for where things go from here, Strahovski could only tell us this: “Look, everyone has their own agenda. Serena has her agenda, June has her agenda, and they are against each other and carrying on as they do in their stubbornness and they want what they want. I think there is that and there is, in true ‘Handmaid’s’ fashion, some surprises around the corner intwined in that.”

New episodes of “The Handmaid’s Tale” launch Wednesdays on Hulu.