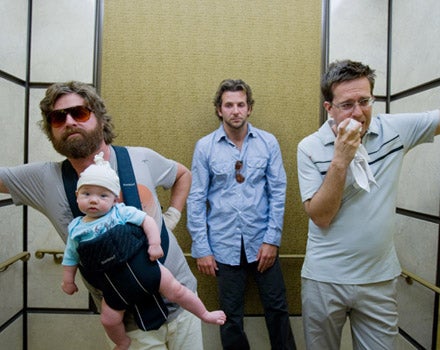 We’d all do well to get raises like this …

"The Hangover" stars Bradley Cooper, Ed Helms and Zach Galifianakis will reportedly each pocket in the vicinity of $5 million against 4 percent of the first dollar gross for the sequel after receiving under $1 million collectively for WB and Legendary’s blockbuster comedy, reports Deadline.

The initial offer was reportedly for $3 million against 1 percent of the gross and came with a deadline attached, which lapsed when the stars’ representatives banded together, according to Deadline.

Should the details of Deadline’s report prove accurate, allow me to speculate as to how lucrative this deal could be for the three stars of "The Hangover," whose original contracts did not contain options locking them into a sequel. "The Hangover" was the highest grossing R-rated comedy of all-time, earning more than $467 million worldwide. Let’s say "The Hangover" sequel performs on par with the original, though the international cume will likely be even greater thanks to "Hangover" brand awareness and Galifianakis’ ascension to stardom. So if the sequel pulls in $500 million, Cooper, Helms and Galifianakis stand to earn $20 million each, in addition to the roughly $5 million they’ll receive upfront. Not a bad pay day by any star’s standards.

Deadline’s report doesn’t even mention co-star Justin Bartha, whose character is really the reason Galifianakis would be hanging out with Cooper and Helms in a sequel. Let’s hope the writers don’t leave Bartha on a rooftop again, because I don’t think his character could survive another sunburn. I’m also wondering if ‘Iron’ Mike Tyson will fight his way into the sequel, or if Heather Graham’s baby has outgrown those sunglasses yet.

Meanwhile, director-producer Todd Phillips’ contract calls for around $10 million against 10 percent, and contains a series of escalators and bonuses that ensure Phillips will make more than the $50 million (and counting) he earned for the original, which was a cash cow for Phillips because he famously agreed to waved his upfront fee in exchange for 15 percent of the film’s overall revenue after WB questioned his casting choices.

At the time, "Wedding Crashers" star Cooper was the only actor with name recognition on the feature side, so he was paid slightly better than Helms and Galifianakis, though none earned more than $300,000. However, once "The Hangover" became a box office behemoth — and during a competitive summer no less — WB rewarded each actor with a $1 million bonus check before sequel negotiations even started.

If the details of Deadline’s report are true, I think Warner Bros. president Jeff Robinov made a very smart decision to shell out for the sequel. It could turn out that greenlighting a safe bet like "The Hangover" sequel actually beats going to Vegas. Aside from a few minor quibbles, I loved "The Hangover" when I first saw it, and found that the comedy holds up quite well when I re-watched it on DVD.

Lightning may not strike twice but I think audiences will be keen to spend another two hours with those characters. Americans are hungry to laugh, and it’s actually kind of sad that each year only one or two comedies catch on with audiences on a major scale. Light-hearted romps like "The Hangover" may not earn Oscar nominations but a good comedy is just as hard to make as a tech-heavy film like "Avatar."

"The Hangover" sequel is aiming for an October shoot if Helms can work out his filming schedule with NBC’s "The Office." Expect the film to be released over Memorial Day weekend next year.