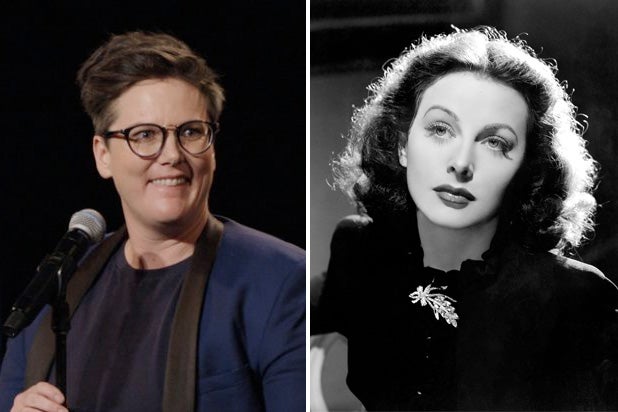 Two of the most talked about shows right now — both streaming on Netflix — are “Nanette,” the passionate and potentially game-changing performance by comedian Hannah Gadsby, and “Bombshell,” a documentary about the woman many consider the most beautiful to ever grace a screen.

On the face of it, you might think there could not be two more diverse women: Gadsby is an Australian gender- and genre-probing lesbian. Hedy Lamarr was an Austrian-born Jew who emigrated here and found film stardom — as well as six husbands. But viewers are clearly responding to both women who, while more than 70 years apart, are capturing a moment. The truth is, if the two time-traveled to meet, they might say, “Yeah, me too!”

Gadsby, whose powerful and surprising rant of a performance manages to analyze and question her dedication to stand-up comedy — claims she has often been the butt of jokes, and asks what self-deprecation means for “someone who already exists on the margins.” Hedy Lamarr also existed on the margins, due to her blinding beauty. “American men seem to be interested in two things only,” she said, “money and breasts.”

Also Read: 'Bombshell: The Hedy Lamarr Story' Film Review: She Was a Glamour Girl and a Scientist

Both women clearly are and were about much more than the first impression they give. Few realized that Lamarr was a science nerd and brilliant student in her younger years. During World War II, she helped perfect a secure radio guidance system for Allied torpedoes. Every time we use Blue Tooth, we can thank her.

Gadsby is also more substantive than one might at first think. Her “Nanette” performance wends its way around to the art history studies she has clearly mastered. She eloquently speaks about Cubism’s ability to allow us to see things in different dimensions. On the other hand, she handily tears down the man who popularized that art form, Pablo Picasso. After watching her make the case, one has to wonder if we can readily separate the artist from the man whose history with women was less than exemplary.

Here, too, there is an interesting connection between the two women. Gadsby speaks of male artists’ frequent use of female nudes, and Lamarr first became famous for an Austrian film called “Ecstasy” in which Lamarr faked an orgasm on screen long before Meg Ryan did. In addition, she’s seen running nude in the wild in a scene (and a film) that she said she could never live down.

Also Read: Netflix in August: What's Coming and What to Watch Before It's Gone (Photos)

Gadsby talks about how she has felt imprisoned by the conventions of comedy, that they have not adequately “told my story.” Lamarr went to her death feeling imprisoned by her looks and the fact she was never compensated for her inventions. “Why not push the envelope? Why not refuse to play by the rules?” she asked at the end of her ultimately sad and underappreciated life.

In her own way, she spoke about the same things Hannah Gadsby would later articulate. “Any girl can be glamorous,” Lamarr said. “All you have to do is stand still and look stupid.”

We imagine she would applaud Gadsby for not standing still, and also for standing up.

From ”Finding Dory“ to ”Ozark“ Season 2