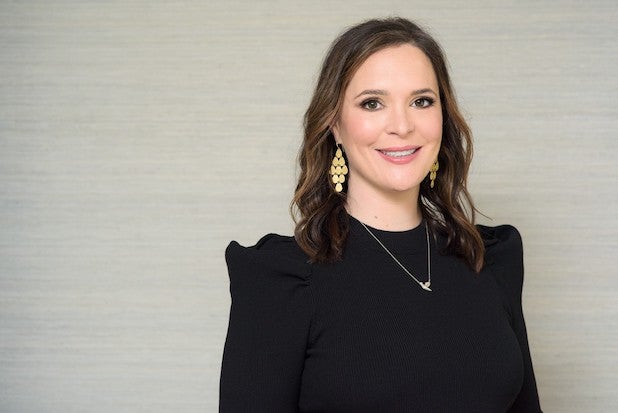 Hannah Minghella, the former president with TriStar Pictures and Television, has left the studio and been named the head of motion pictures for J.J. Abrams’ Bad Robot, Bad Robot announced Thursday.

Nicole Brown, who was recently promoted to an EVP role at TriStar, will be Minghella’s successor and will handle TriStar’s film development and production activities, Sony Pictures Motion Pictures Group chairman Tom Rothman told the staff in a company-wide memo on Thursday.

“Hannah will spend the next few weeks helping to insure a smooth transition,” Rothman said in a memo obtained by TheWrap. “I know I speak for all of us when I say we thank her for everything and wish her the very best going forward.”

In January, Minghella expanded her role at TriStar to include TV. She most recently oversaw the Mister Rogers movie “A Beautiful Day in the Neighborhood” and Edgar Wright’s “Baby Driver.” At Bad Robot, she’ll report directly to Abrams, the CEO and chairman, and co-CEO Katie McGrath.

“It is, essentially, a dream come true to welcome Hannah to Bad Robot. Her wealth of experience, exceptional reputation, abundant talent relationships, great taste and sharp wit make her the rarest combination. Katie, Brian and I have admired her work from afar for years, and we consider ourselves and the rest of our team exceedingly lucky to collaborate with Hannah in building a slate of diverse, dynamic and thrilling films. We can’t wait to get started,” Abrams said in a statement.

“I will forever be grateful for my fourteen years at Sony, for the movies I have had the privilege to work on and for the amazing people I have had the pleasure to work with, especially Tom Rothman and Tony Vinciquerra who have been incredible mentors and advocates over the last few years and, of course, Amy Pascal who originally brought me to the studio,” Minghella said in a statement. “This move presents the opportunity for me to collaborate more closely with a singular creative talent at a truly unique and dynamic company. It is a thrilling time to be joining forces with JJ, Katie, Brian, and the whole Bad Robot team. I have long admired their creativity, integrity, and passion, and I am so excited to begin this next chapter.”

Brown joined TriStar five years ago and was a strategic partner with Danny Boyle, Jodie Foster, George Clooney, Julia Roberts, Jonathan Demme and Meryl Streep. She had a brief stint at Miramax and worked with producer Marc Platt before becoming EVP at Good Universe, overseeing films such as “Neighbors,” “This is the End,” “50/50” and the Harold and Kumar franchise. She’s currently shepherding the “Baby Driver” sequel and overseeing the production of “The Woman King,” starring Viola Davis and Lupita Nyong’o and “What Alice Forgot” by the author of “Big Little Lies.”

Bad Robot announced last month a collaboration with WarnerMedia in which Abrams and the company would develop original theatrical films for Warner Bros. Pictures and New Line Cinema.

Minghella was appointed to TriStar Pictures in 2015 and before that served as president of production for Columbia Pictures, overseeing “Sausage Party,” “American Hustle,” “Captain Phillips,” “21 Jump Street” and “Skyfall,” among others. She joined Sony in 2005 as a director of creative affairs working under Amy Pascal. And prior to joining Sony, Minghella spent four years at Miramax Films in New York, where she served as a creative executive.

Born in England, Minghella sits on the board of Women In Film, City Year Los Angeles and the Archer School For Girls, and is a founding member of the Los Angeles Women’s Collective, a political action committee that empowers women to influence political and legislative progress.

Read the full memo from Rothman below:

I want to make you aware of some changes affecting our TriStar label.

After 14 terrific years of dedicated service to the company, Hannah Minghella will be moving on to become the head of film operations at Bad Robot. We will miss her greatly, but this is a terrific opportunity for her. One consolation for us is that in her new job, we will have opportunities to continue to work together in the future.

Nicole Brown, who was recently promoted to EVP at TriStar, will assume responsibility for supervising TriStar’s film development and production activities, which will continue unabated. Nicole was the very first person I hired when I came to Sony five years ago and I have great confidence in her.

It’s a busy time at the label. “Beautiful Day in the Neighborhood,” starring Tom Hanks, is set for release at Thanksgiving, and “Happiest Season,” starring Kristen Stewart and Mackenzie Davis will begin principal photography in January. And there are numerous other high-profile projects currently in various stages of development including “The Last Human,” to be directed by Phil Lord and Chris Miller, “The Nightingale,” “Matilda the Musical,” “The Alchemist,” “Guys and Dolls,” “What Alice Forgot” and a “Baby Driver” sequel among others.

Hannah will spend the next few weeks helping to insure a smooth transition. I know I speak for all of us when I say we thank her for everything and wish her the very best going forward.