Starring Miley Cyrus, the new season starts shooting Jan. 18 and is expected to produce enough episodes to run through spring of 2011, when the star’s contract for the show expires. 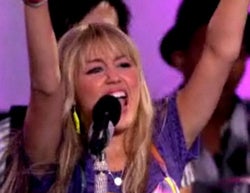 In the Disney Channel show, she plays the dual role of average teen schoolgirl Miley Stewart and famous pop singer Hannah Montana, concealing her real identity from the public.

Cyrus has made no secret of her desire to move on to more adult roles.

In fact, the series will incorporate some of Cyrus’ struggles with her teen vs. adult roles.

Disney Channel Worldwide’s Adam Bonnett told the New York Post that the season-three finale, "Is Miley Saying Goodbye?," is "a big one-hour event where we find out what Miley Stewart’s decision is going to be." That episode will air in mid-March.

The fourth season, starting in late spring, will continue to address the actress’s real-life effort to leave behind the character that made her famous.

Cyrus has been trying to move into non-Hannah Montana movies. She has a cameo as herself in the upcoming "Sex and the City 2" and stars in the coming-of-age drama “The Last Song,” adapted from the Nicholas Sparks novel; that’s due out in April.