Comedian Hannibal Buress had his mic cut off minutes into his set at a Catholic university Saturday night after making a joke about the church’s history of child molestation, according to attendees.

Along with Nick Jones, Buress was appearing at Loyola University Chicago’s annual two-night event, Colossus, in which a musical act performs one night and a comedian the other. Buress began his set by sharing an email he received from the university with content restrictions for his act, including the use of foul language and topics regarding rape, sexual assault, race and sexual orientation.

Minutes into his set, the comedian referenced molestation of children, and his microphone was cut off. The crowd booed at first, then quieted so he could be heard without a mic. But the background music volume raised until he stepped off the stage.

While off-stage, Buress responded to a tweet from someone in the audience who wondered “wtf” happened. Buress replied, “Weird way to celebrate sweet 16.” He, apparently, was referencing Loyola Ramblers’ win over the Tennessee Volunteers earlier that day. Although Buress’ tweet has been taken down, The Phoenix published a screen grab. 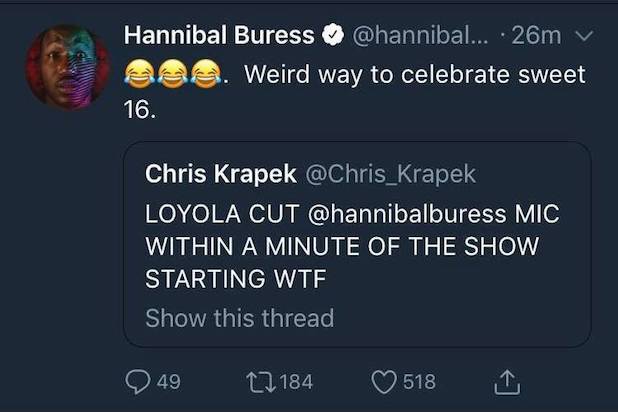 Disappointed fans voiced their disapproval of Buress’ forced exit by chanting his name at the venue and on Twitter.

Fresh off celebrating a sweet 16 appearance Loyola kicks Hannibal Buress off stage for exposing their asses and joking about the Catholic Church, this is absolutely nuts they’re digging themselves a huge hole

According to a member of the audience, when Hannibal returned 15 minutes later to a standing ovation, he said, “B—h a– old people, I can project.”

"Bitch ass old people, I can project."
Hannibal Buress' reaction to the content restrictions he was supposed to put on his show and his mike being turned off.