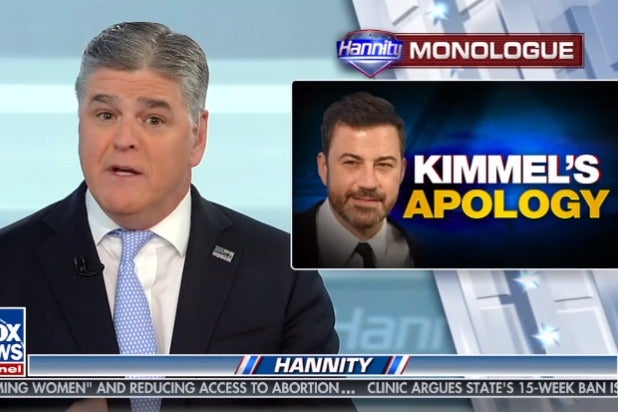 After a feud between Sean Hannity and Jimmy Kimmel erupted last week over Kimmel’s jokes about Melania Trump at the White House Easter Egg Roll, Kimmel attempted to deescalate the situation over the weekend by issuing an apology for some of his harder edged comments — and Sean Hannity addressed Kimmel’s apology directly on his Fox News show Monday night.

Hannity said he would choose to accept the apology because “it’s how I was raised,” though he did qualify his acceptance by saying the apology “seems” less than sincere on Kimmel’s part.

“On the surface, I’ll be honest, this seems to be more of a forced, Disney corporate apology, directed more towards the LGBTQ community,” Hannity said, with long pauses between each letter like he was struggling to remember them, “rather than about Kimmel’s comments about the first lady.”

But Hannity agreed that the fight should and, and invited Kimmel to appear on his show to discuss any topic Kimmels wants.

“I’ve noticed, by the way, you seem focused on politics. You seemed sincere when you talked about healthcare. You seem sincere when you talk about the country. I wanna extend an invitation. You wanna come on this show, I’ll promise no name-calling, no anger, no rehashing of the Twitter fight,” Hannity said. “We wanna have a serious discussion, we can talk about the president, his policies, healthcare, comedy, political correctness, any boycotts, how I’ve supported Bill Maher, Howard Stern, Don Imus, Opie and Anthony, people I disagree with vehemently. What I bet is you’ll actually agree with me on a lot more issues than you think. But from my point of view, it’s over with Jimmy Kimmel.”

However, he then issued a threat to Kimmel that if he tries to start this feud up again then Hannity will play some more unflattering old clips from earlier in Kimmel’s career.

“Unfair attacks, there need to be an end to them. There’s no shortage, by the way, of comedic material out there. Jimmy, if you do want to start up again, I promise I’ll punch back even harder,” Hannity said. “My producers spent all weekend compiling a lot of your highlights, or lowlights, in your career. They don’t make you look too good. So instead of airing them, we’ll put ‘em in storage, and we have more important pressing issues like what’s happening in Syria and the gassing of women and children.”