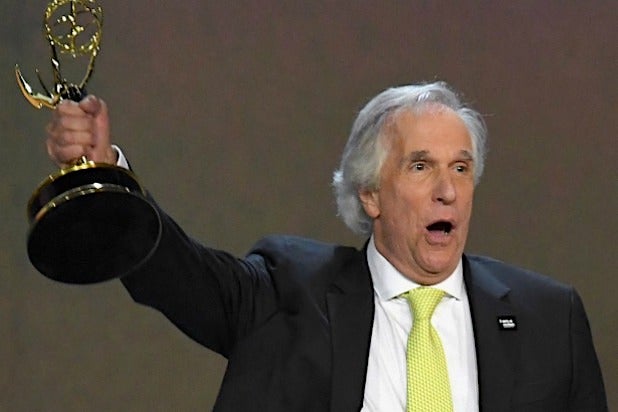 Henry Winkler had a “Happy Days” reunion of sorts at the 70th Primetime Emmy Awards as he tweeted a picture of himself with Ron Howard, who played Richie Cunningham on the iconic show.

“Pals at the Emmys,” tweeted Winkler.

Pals at the Emmys pic.twitter.com/lLHoadkltP

“My friend’s win is so deserved and great,” responded Howard.

my friend’s win is so deserved and great. ! Bravo @hwinkler4real https://t.co/meZhp5ZPtD

During Monday’s ceremony, the first trophy went to Winkler for his work on “Barry.” Among those the “Happy Days” alum defeated was Alec Baldwin, who was nominated for his President Donald Trump impression on “SNL.”

The acclaimed new comedy’s 13 nominations include Outstanding Comedy Series and acting nods for Hader and for Winkler, 42 years after he received the first of his three noms for the iconic role of Fonzie on “Happy Days.”

“I was 27 when I got the Fonz,” Winkler told TheWrap previously. “I am now 72. There are no words to explain to you the gratitude that I get to continually live my dream.”

And by the way, Winkler says he’s not embarrassed at all by the fact that the phrase “jumping the shark” came from a 1977 “Happy Days” scene in which Fonzie, still clad in his omnipresent leather jacket, went water skiing and jumped over a shark.

“Newspapers would mention jumping the shark,” he said, “and they would show a picture of me in my leather jacket and swim shorts water-skiing. And at that time I had great legs. So I thought, ‘I don’t care.’ And we were No. 1 for the next four or five years.”

“There was a book, there was a board game and it is an expression that is still used today,” he said. “And I’m very proud that I am the only actor, maybe in the world, that has jumped the shark twice — once on ‘Happy Days,’ and once on ‘Arrested Development.'”