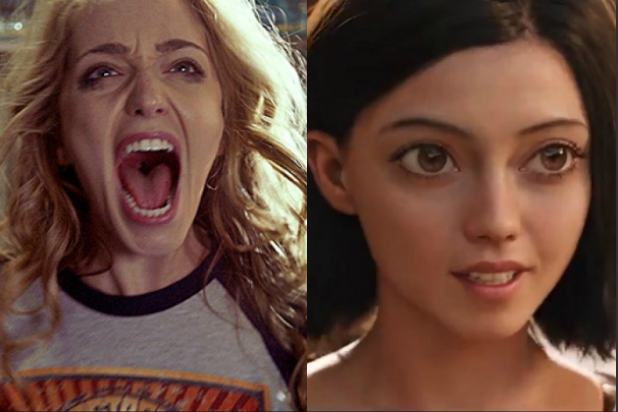 With “The Lego Movie 2” suffering a very disappointing opening, the sluggish business that defined the start of the 2019 box office is now expected to continue through February, and this weekend’s new releases aren’t expected to change that, even if some of them find success on their own merits.

One film that could be such a hit is Universal/Blumhouse’s “Happy Death Day 2U,” the sequel to Christopher Landon’s 2017 horror film. In typical Blumhouse fashion, the film was made on a thrifty $9 million budget. Releasing on Wednesday on 3,000 screens, “2U” is projected for a six-day opening in the high $20 million range through Presidents’ Day.

Another lower-budget release that could find modest success is Warner Bros./New Line’s “Isn’t It Romantic,” a satire of romantic comedies starring Rebel Wilson that is projected for a six-day opening of $20-22 million from 3,700 screens.

But the third release of the extended weekend, Fox’s “Alita: Battle Angel,” is looking at a disastrous opening weekend. Made on a budget reported to be at least $150 million, independent trackers are projecting a five-day opening of no higher than $30 million. Fox co-produced the film with TSG Entertainment, director Robert Rodriguez’s Troublemaker Studios, and producer James Cameron’s Lightstorm Entertainment.

“Alita” was originally supposed to be released during the holiday season, but was pushed to February to distance it from a crowded Christmas release slate led by “Aquaman.” But even with the lack of a major film dominating audience attention, “Alita” hasn’t been able to significantly increase interest. Reviews aren’t showing good signs either, with a current Rotten Tomatoes score of 59 percent.

“Alita” will be relying on overseas box office, especially in Asia, to recover. It has grossed $32 million already from 11 countries, led by Korea, where it opened to $10.9 million. Releases in Japan and China are set for next weekend.

Analysts and distribution heads have taken it as a given that Q1 of 2019 would see a huge year-over-year drop compared to 2018. Nothing on the slate this quarter has even half the box office potential of “Black Panther,” which grossed $700 million domestically and stands tall as the biggest pre-summer hit of all-time.

But even compared to 2017, this year’s start is rough. After “The Lego Movie 2” opened to just $34.5 million, last weekend’s combined total only reached $114.3 million. That’s down 40 percent from the same weekend two years ago. Presidents Day Weekend 2017 saw a combined four-day total of $179.5 million, led by a $42.7 million second weekend total for “The Lego Batman Movie.” None of this year’s offerings are expected to make that much this weekend.

“We always talk about momentum at the box office, but it really is that important,” said Comscore’s Paul Dergarabedian. “In past years we had films like ‘Star Wars’ and even some strong competitors like ‘The Greatest Showman’ and ‘Jumanji’ provide a strong lead-in to the year, followed by great early-year films like ‘Black Panther,’ ‘Deadpool’ and ‘Get Out.'”

“We’ve enjoyed a perfect storm, but this year it’s like an imperfect storm where there aren’t enough titles drawing audience interest or getting people excited to keep coming back. We may have to wait until March to get out of this slump,” he added.

“Alita: Battle Angel” stars Rosa Salazar as the titular cyborg girl who realizes she may have a past life as a human that may have been erased from her memory. When she also discovers that she possesses extraordinary powers, she is forced to protect her new friends and family from the corrupt forces that seek to control her powers to their own ends. Christoph Waltz, Mahershala Ali and Jennifer Connelly also star.

“Isn’t It Romantic” stars Rebel Wilson as a cynical girl who hates romantic comedies, only to find her life transformed into one after she is knocked unconscious during a mugging. Todd Strauss-Schulson directed from a script by Dana Fox, Erin Cardillo and Katie Silberman. Liam Hemsworth, Priyanka Chopra and Adam DeVine also star in the film, which has a 65 percent RT score.

“Happy Death Day 2U” sees Jessica Rothe return as Tree, the protagonist of the first film who was forced to relive her birthday over and over until she unmasked the killer who murders her at the end of it. Now in college, Tree finds herself stuck in the loop again, but now the killer is hunting down others in addition to herself. Christopher Landon returns as writer-director, with critics mixed on the sequel’s more comedic approach with a 59 percent RT score.