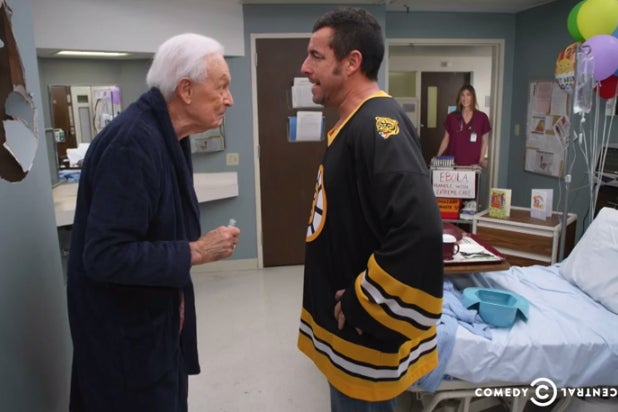 Ironically, Jon Stewart‘s “Night of Too Many Stars” autism benefit may spark an Ebola awareness fundraiser spinoff of its own, as participants Adam Sandler and Bob Barker used the platform and contagious disease to fight to a gruesome double-death.

The two “Happy Gilmore” combatants staged a four-minute-plus fight scene for the Comedy Central show, delighting those in attendance and grossing out anyone who watches the clip. It started out with some innocent insults, but escalated to violence rather quickly — just like in the 1996 film.

“You are looking old. How old are you, 60?” Barker teased Sandler, who was in the lifelong gameshow host’s hospital room, helping him eat. “You’re looking chunkier than the soup.”

“I guess doing all of those movies without me took its toll,” he continued. “If I had known that I had to toss your salad to be in another one, I would have — but Rob Schneider didn’t send me the memo.”

Just like in “Happy Gilmore,” however, Barker fights back. The worst comes when the former “Price Is Right” face dumps his used bedpan on Sandler’s head.

“How many fucking asparagus did you eat today?!?” Sandler exclaims.

Also Read: Jon Stewart Trashes CNN for Star of David Wipe: ‘Are You Kidding Me? That Actually Happened’ (Video)

Then Barker spits the Ebola virus in the younger mans face. Yep, you read that correctly.

“I wish I could see David Spade‘s face when he finds out there won’t be a ‘Grown Ups 3,'” Barker quips.

The clip fast-forwards two months where the duo fight over In Memoriam applause. Abraham Lincoln, a crocodile and Carl Weathers as Chubbs join them on the heavenly cloud, egging Sandler on.

“Night of Too Many Stars: America Comes Together for Autism Programs” taped on Feb. 28; a live telethon will take place March 8 at 8 p.m. on Comedy Central.