Last year may have been bad for videogames overall — and nothing pulled it under quite like the music-themed side of the gaming business.

The reason may simply be that the genre got too big, too fast.

Despite expansions in play, instruments and superstars — including the Beatles — sales for the “Guitar Hero” and “Rock Band” franchises and other games in the genre were down 36 percent in 2009 from 2008, according to the NPD Group, an industry watcher.

"It was a challenging year in 2009 for the videogame industry in general,” Philippe Dauman CEO of Viacom, which owns MTV Games, said recently, “and certainly for the 'Rock Band' franchise."

“Challenging” is a polite term when sales of music videogames went from over 25 million units to less than 16 million in just one year.

It’s not like “Guitar Hero” or “Rock Band” were out of sight or out of mind.

Activision’s “Guitar Hero V,” which came out in early September, had a pivotal brand cameo in Vaughn’s hit comedy “Couples Retreat." The actor, who plays a videogames salesman in the movie, jammed out to Billy Squier’s “Lonely Is the Night” on his guitar controller for a top score against his on-screen nemesis.

More importantly, published by MTV Games, produced by Harmonix and partially developed by Beatles progeny Dhani Harrison, the heavily promoted “Beatles: Rock Band” also came out in September to coincide with the release of the Fab Four’s entire remastered catalogue. 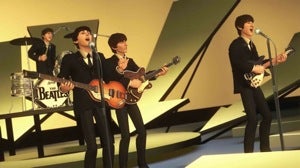 In this economy, sales of 1.2 million of anything is nothing to scoff at – especially when plateauing console sales for the Wii, Xbox and PS3 and a sudden drop off of softcore gamers are taken into account.

It is, however, far less than the almost 2 million units that 2008’s “Rock Band 2” sold in its first six months; and it didn't have to send millions to the Beatles estates and publishers.

Though MTV Games said it was a part of planned “restructuring,” dozens of Harmonix employees were laid off in December. In a recent SEC filing, Viacom seeks back millions paid out to Harmonix, which MTV Games bought back in a much brighter 2007, based on financial targets that have not been met.

It wasn’t any better for other new entries into the field.

Bringing the mash-up mixes of turntablism to the genre, “DJ Hero,” which was released the last week of October, had disappointing sales of 830,000, which were only offset by the revenues of its $100 price tag.

Hoping for the best of both markets, October’s “Lego Rock Band,” which went for less than $60, got neither – having sold less than 600,000 copies. That’s still better than “Guitar Hero: Van Halen,” which hasn’t even cracked sales of 250,000 copies since coming out just before Christmas. 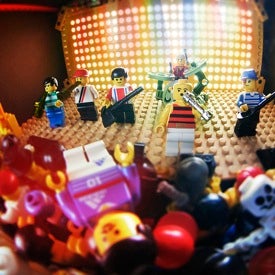 “The issue with music games was how fast they grew,” says Michael Pachter, who follows the industry for equity and investment firm Wedbush Securities. “They penetrated the installed base so fast that their growth was unsustainable.”

Music videogames sales went from $200 million in 2006, when “Guitar Hero II” was released, to $1 billion in 2007, which saw the release of both “Guitar Hero III” — with its avatar of Slash and online player capacity — and the first “Rock Band,” with its peripherals instruments that allowed players to simulate bass, drums, vocals and guitar.

“The great triumph of these games is as ‘party’ games, and this is a field that has gotten more and more crowded over the last couple of years,” Tom Chatfield, author of “Fun Inc. — Why Games Are the 21st Century’s Most Serious Business,” told TheWrap.

Despite the decline, the field is going to get even more crowded in the next few months.

For one thing, more iPhone apps are on the way.

“Rock Band” put out its own app late last year, and on March 16, Universal Music — which like “Guitar Hero” publisher Activision is owned by Vivendi — launched “Six String.”

The app, which comes with tracks from Bon Jovi, Fall Out Boy, Tom Petty, Peter Frampton, Orianthi and the Scorpions, lets players take plucking and strumming to three levels of difficulty as well as purchase other songs to play, corresponding videos and ring tones. 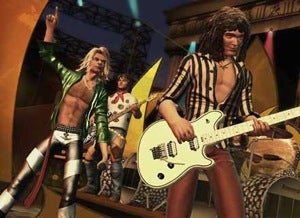 And for consoles, more “Rock Band” is coming this spring, with the release of “Green Day: Rock Band” on June 10.

Unfortunately, the Bay Area rockers might be old news by the time “Power Gig” — which was unveiled at the Game Development Conference in San Francisco on March 9 — comes out this fall.

The idea is to bring gamers closer to be actual musicians, learning in playtime how to form real chords and hit the strings just as hard and as precisely as their heroes.

The hope is that this will attract a whole new group of fans to music-based gaming.

“Novelty is a huge driver for the games industry,” he notes, “and this genre can no longer look ‘new’ no matter what form it takes on.”

“We hit the saturation point,” says Wedbush’s Pachter, “I think the industry will probably level off for a while, as we migrate from a hardware dominated mix to a software dominated mix. It is probably not going to grow, but should remain large, say $600 million plus, for many years.”