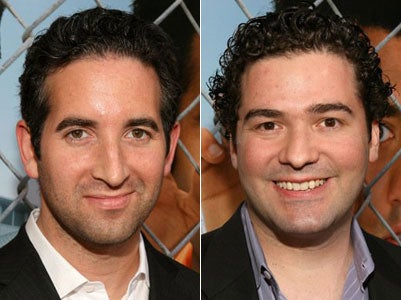 Jon Hurwitz and Hayden Schlossberg are … franchise jumpers. And from a purely financial standpoint, the writing-directing team seems to have made the right decision.

Rather than direct "A Very Harold & Kumar Christmas," which the duo has already written and was previously attached to direct, Hurwitz and Schlossberg have chosen to take the helm of "American Pie 4," the seboot (part-sequel, part-reboot) they’re currently writing for Universal, according to the Hollywood Reporter.

That leaves newcomer Todd Strauss Schulson to direct a probable third "Harold & Kumar" movie, although his deal hasn’t closed yet.

The former music video and commercial director first garnered Hollywood’s attention after his short "Mano-a-Mano" premiered at SXSW in 2008.

Both projects are currently keeping their loglines under wraps, although the "Harold & Kumar" sequel would obviously be Christmas-themed. THR’s insiders do claim that Neil Patrick Harris (who plays a hard-partying version of himself) will be resurrected for the third film after dying in the second.

While I would’ve liked to have seen Hurwitz and Schlossberg finish what they started (they wrote the first two movies and also directed the second one), I understand that "American Pie 4" is a bigger opportunity for them. "Harold & Kumar" may offer the duo more creative freedom, considering they conceived the characters and the series is produced on a smaller scale, but it’s not as though the "American Pie" franchise comes with a lot of creative restrictions.

"Harold & Kumar" might be the hotter franchise right now, seeing as "American Pie" has spent the better part of a decade existing solely as a direct-to-DVD brand, albeit a very successful one. But if anyone can breathe theatrical life into the franchise, its Hurwitz and Schlossberg. Their challenge lies with rounding up the original’s key cast members, and THR reports that one reason the project is in such high gear is that most of the actors have already expressed interest in reprising their bread-and-butter roles, though no deals have been made yet.

Meanwhile, THR reports that Mandate, the production company behind the "Harold & Kumar" movies, recently completed deals with John Cho and Kal Penn to reprise their roles, although TheWrap has been unable to independently confirm Penn’s deal with his representatives, and the White House is saying Penn has not yet given notice.

The big winner in this franchise swap has to be "American Pie 4," because in Hurwitz and Schlossberg, Universal has two filmmakers who are comfortable working with R-rated material and know how to get the most comedy out of a sight gag. "Harold and Kumar" also happens to be a slightly smarter series, so hopefully Hurwitz and Schlossberg will bring the politically-conscious intelligence of those characters to their new franchise.

As for "Harold & Kumar," the original "White Castle" film cost $9 million and took in $23 million worldwide, while the "Guantanamo Bay" sequel performed nearly twice as well, earning $43 million worldwide while only costing $12 million.

However, the "Harold & Kumar" series does not perform well overseas, whereas the "American Pie" movies earned 50-60 percent of their worldwide cumes at the foreign box office.