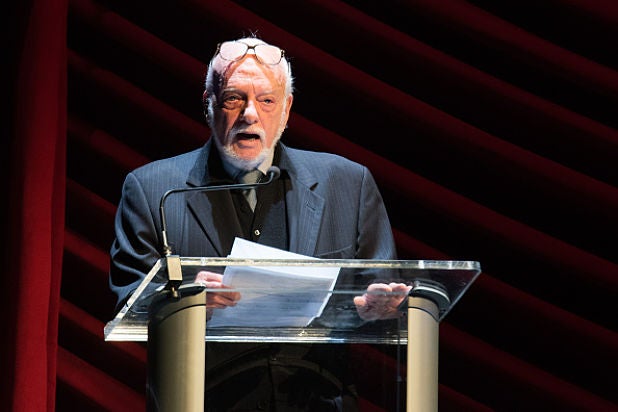 Harold Prince, the legendary Broadway producer and director behind such hits as “Fiddler on the Roof,” “Cabaret,” “Sweeney Todd” and “The Phantom of the Opera,” died Wednesday morning after a brief illness in Reykjavik, Iceland. He was 91.

Over his six-decade career, he earned 21 Tony Awards — more than any other individual — both for directing and producing major musicals like 1965’s “Fiddler on the Roof,” 1967’s “Cabaret” and Stephen Sondheim’s 1971 show “Company.”

Prince also received three special Tony Awards, for “Fiddler on the Roof” in 1972, for “Candide” in 1974 and a Lifetime Achievement honor in 2006.

Prince became such a fixture of Broadway that he inspired a tribute revue, “Prince of Broadway,” that played two years ago at MTC’s Samuel J. Friedman Theatre.

Andrew Lloyd Webber, whose hits “Evita” and the still-running “The Phantom of the Opera” were initially directed by Prince, paid tribute in a statement on Wednesday: “Farewell, Hal. Not just the prince of musicals, the crowned head who directed two of the greatest productions of my career, ‘Evita’ and ‘Phantom.’ This wonderful man taught me so much and his mastery of musical theatre was without equal.”

Prince got his start as an assistant to another legendary Broadway showman, George Abbott, with whom he co-produced the Tony-winning 1955 hit “The Pajama Game.” The following year, he earned his second Tony for producing the Abbott-directed “Damn Yankees.”

He branched out as a director in the early ’60s with a series of flops — until striking success with “Cabaret,” which went on to become an Oscar-winning film as well.

Prince had a long association with Sondheim, directing such shows as “Follies,” “A Little Night Music,” “Pacific Overtures” and “Sweeney Todd.”

He also earned Tonys for directing two of Andrew Lloyd Webber’s biggest blockbusters, 1980’s “Evita” and the still-running 1988 mega-hit “The Phantom of the Opera.”

Prince is survived by Judy, his wife of 56 years; his daughter, Daisy; his son, Charles; and his grandchildren, Phoebe, Lucy, and Felix. As per his wishes, there will be no funeral but there will be a celebration of his life this fall with the people he loved most, the members of the theatrical community that he was a part of for seven decades.