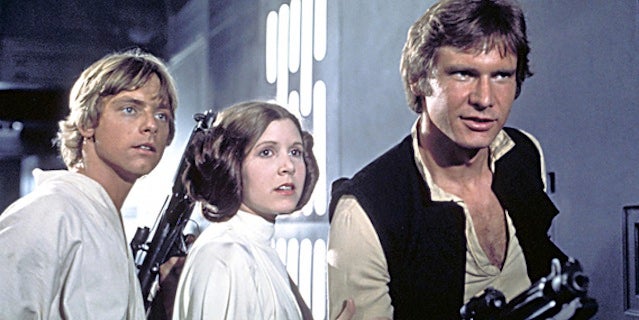 The film series' original stars (below, at 2005 AFI tribute to Lucas) had hinted they would be up for reprising their roles in the outer-space adventure before, but Lucas made it seem as though at least a few members of the trio have already signed the dotted line.

In fact, they may have boarded "Episode VII," as its known to the Star Wars faithful, before Disney plunked down over $4 billion to buy Lucasfilm last December. "We had already signed Mark and Carrie and Harrison — or we were pretty much in final stages of negotiation. So I called them to say, ‘Look, this is what’s going on,'" Lucas told Bloomberg Businessweek when asked about whether he kept the actors in the loop about the Disney acquisition.

The Star Wars creator seemed to realize that he may have divulged too much, however.

"Maybe I’m not supposed to say that. I think they want to announce that with some big whoop-de-do, but we were negotiating with them.” he added. “I won’t say whether the negotiations were successful or not.”

The Bloomberg Businessweek profile provides fascinating insight into what motivated Disney's decision to go after Lucasfilm (branding, branding, branding/toys, toys, toys), as well as the blow by blow of how the deal went down (Walt Disney World's recreation of the Brown Derby will see its power breakfast cred increase exponentially).

It also gives a hint of how Disney Chairman and CEO Bob Iger hopes to expand the Star Wars universe. He has already told investors that the studio is planning to make spin-off films focused on other characters from the Star Wars universe similar to what Marvel has done with its library of superhero characters. Lawrence Kasdan ("Return of the Jedi") is working on one script for the films and Simon Kinberg ("Sherlock Holmes") is working on another.

"Star Wars: Episode VII" will be directed by J.J. Abrams and will hit theaters in 2015.

Iger told Bloomberg Businessweek that ABC, which Disney owns, and Lucasfilm are discussing a live-action TV series. That mimics what the studio is doing with "The Avengers." It has purchased a pilot focused on S.H.I.E.L.D, the super-secret agent organization that factors into the hit film.

But the Disney chief did seem wary of trying fans patience for cross-platform tie-ins.

“I don’t want to overcommercialize or overhype this,” he told the magazine. “It’s my job to prevent that.”