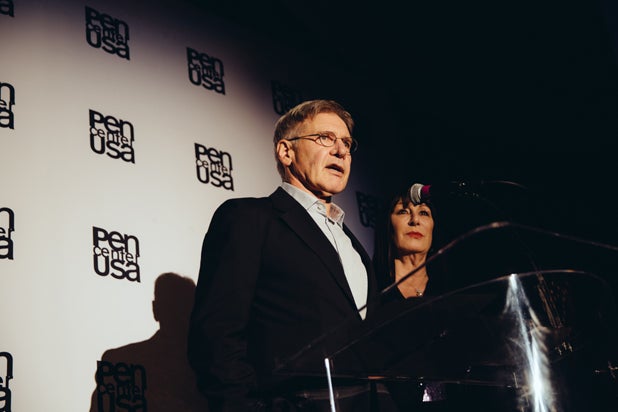 Harrison Ford recalled his pre-movie star days as a carpenter while presenting a lifetime achievement award to Didion, an employer back then, Monday night at the 23rd annual PEN Literary Awards Festival.

“I just want to tell you all how much her friendship has meant to me,” Ford told the crowd at the Beverly Hills Hotel. “I worked on [Didion and her husband’s] house in Malibu. I was the first thing they saw in the morning and the last thing they saw before cocktails.”

“She means a lot to me and I wish she were here, tonight, for me to be able to tell her that.”

The 78-year-old’s health prevented her from being able to attend the night, so Anjelica Huston accepted the award on her behalf, reading her acceptance speech.

“I find myself inordinately flattered and deeply pleased to receive this award,” Didion wrote.

Oliver Stone and governor Jerry Brown were among the other big names at the event, where writers were honored in categories ranging from poetry to screenplay.

Brown opened the event by noting that one of his sisters attended UC Berkeley with Didion, and they were sorority sisters.

The night took a serious turn when Stone presented the First Amendment Award to Pulitzer prize-winning journalist Chris Hedges. Both Stone and Hedges issued fiery condemnations of the current administration’s treatment of journalists and whistleblowers.

Stone called Hedges “a man who, in a climate of obfuscation, confusion, deceit and plain old intimidation, seeks to speak the truth.” Hedges said “American exceptionalism and virtue” was “a myth,” calling the assault on civil liberties “under this administration is more egregious than under George Bush,” noting its persecution of Chelsea Manning, Edward Snowden and Julian Assange.

He said he hopes that PEN will “embrace the battle to protect these courageous whistleblowers.”

Hedges’ comments were a marked contrast to those of Freedom to Write award winner Sonia Nassery Cole, who tearfully called America the only true democracy in the world and said she was proud to call herself an Afghan-American.

Boal thanked “Zero” director Kathryn Bigelow, who was in attendance, calling her “the author of the film.” Strong, meanwhile, said he was “unbelievably flattered to be in a room with so many thrilling an talented people” before thanking the authors of the book upon which “Game Change” was based, the movie’s director, Jay Roach and HBO.

PEN Center USA, founded in 1943, is a nonprofit association that works to protect the rights of writers worldwide and promote the literary community in the western United States.