Almost two decades after J.K. Rowling‘s first Harry Potter novel landed in book stores in the U.K. and then become a global phenomenon, the Boy Who Lived is having a revival in many different forms.

Ahead of the prequel “Fantastic Beasts and Where to Find Them” starring Eddie Redmayne hitting movie theaters on Friday, the stage play “Harry Potter and the Cursed Child” has taken over London’s West End on a “Hamilton”-esque scale.

Tickets for the mammoth production, which is divided into two parts and lasts almost five hours and 15 minutes with a much-needed dinner break in between, were going for as much as $2,455 when it first opened last summer as Muggles from around the world journeyed to London’s Palace Theatre. On Sunday, it was named Best Stage Play at the London Evening Standard Theater Awards, as U.S. fans hope that it will expand to Broadway (if only there was a spell to conjure that up). 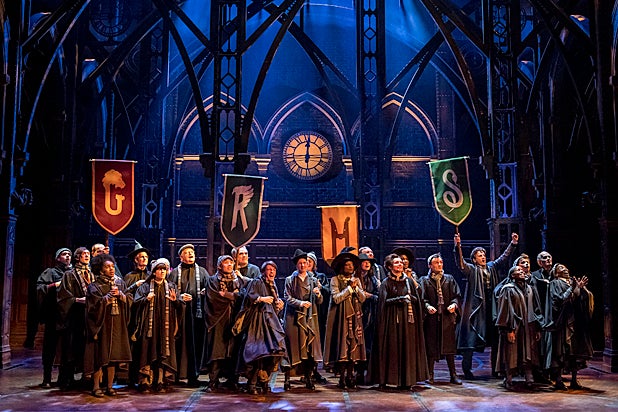 TheWrap visited London to be immersed in the full Harry Potter experience — from the wonder of the “Cursed Child,” to the behind-the-scenes look at Warner Bros. “Making of Harry Potter” studio tour, and even a glimpse of the “real” Platform 9 ¾ at King’s Cross Station as commuters rushed past.

Built in 1891, the Palace Theatre (located in the West End’s theatre district near Covent Garden) has a Hogwarts-esque atmosphere with dark corridors winding to different hidden levels, making it the perfect venue for a Potter play.

Based on a new story by Jack Thorne, Rowling and John Tiffany, “Cursed Child” is set 19 years after we saw Harry beat Voldemort at the Battle of Hogwarts and is dubbed the eighth and ninth installments of Harry’s saga. The plot revolves around a grown-up Harry Potter (Jamie Parker) — now the Head of Magical Law Enforcement — and his family, comprised of wife, Ginny (Poppy Miller), and children James, Albus and Lilly (names that should be familiar to all Potter fanatics). 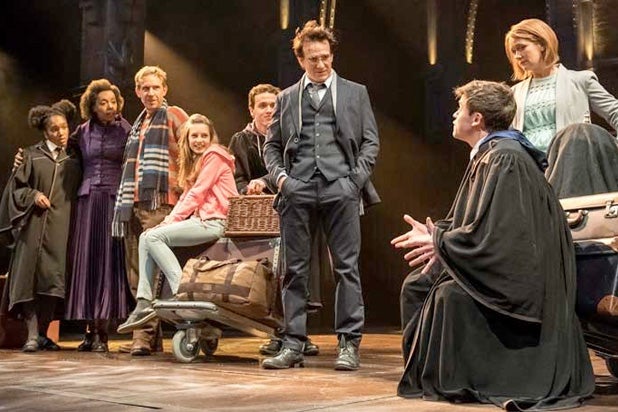 While it still captures the wonders of the magical world and quintessential Hogwarts experience (gluttonous banquets, magical sweets and talking portraits), the crux of “Cursed Child” is the conflicted relationships between fathers and sons.

If you were hoping Harry was going to live happily ever after when we saw the flash forward to his adulthood at the end of “Deathly Hollows,” you’ll be sadly mistaken. Even he doesn’t have a potion for perfect parenting, especially when it comes to the teenage angst of his middle child, Albus (Sam Clemmett). From the minute he sets foot on the Hogwarts Express for his first term, young Albus is blatantly different to his famous father. He struggles to fit in, screws up his spells and — God forbid — sucks at Quidditch.

Albus makes one buddy at least, and that’s unlikely BFF Scorpious Malfoy (Anthony Boyle) — yep, the platinum-haired son of Harry’s arch-nemesis Draco (Alex Price). The chemistry between these two social misfits is the crux of the play, built on their awkwardness around the cool kids and their failure at typical high school experiences — and not-so typical ones, like broom flying. 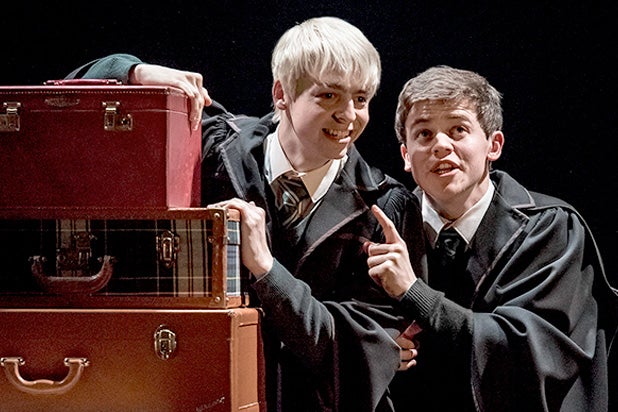 You’d have assumed that Albus would be the main character, but Scorpious steals the show in many pivotal scenes as the kind-hearted kid hated by his fellow students because they think he’s the son of Voldemort. “We’re losers, we’re always going to be losers,” he tells Albus.

As for the trio who led the first seven books and movies, they are now adults with kids of their own, and still best pals, with Ron (Paul Thornley) and Hermione (Noma Dumezweni) even married. For much of the play, Harry is an angry, angst-ridden fortysomething going through a midlife crisis and feeling pain in his scar for the first time in 22 years; Hermione is as A-type as ever (especially now she’s Minister of Magic); and Ron epitomizes adorable goofiness. While his friends went into politics, Ron runs a joke shop and brings a welcome comic relief as always.

As for Draco, he is surprisingly witty, likable, and offers a refreshing contrast to Harry’s serious tone. He even comes out with some of the smartest one-liners and engaging monologues in the script, as he analyzes his Deatheater family background, the tragedy surrounding his wife, and his struggles to be a good father to Scorpious. Price’s performance is a refreshingly divergence from Draco’s douche bag caricature in the original films … but he still has amazing hair. 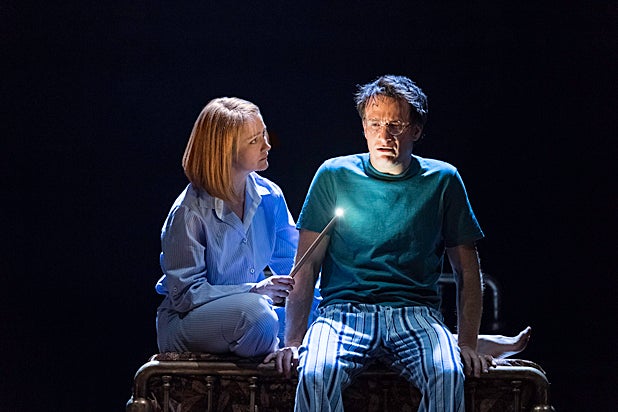 If you take out the magic, witches and wizards, “Cursed Child” could be a well-produced and flawlessly acted family drama. But then the show adds movie-standard special affects. From an enchanted bookshelf and floating chairs, to stolen noses, transfiguration, ghostly Dementors, plus the welcome return of a certain girls’ washroom ghost — the stagecraft is nothing short of phenomenal.

Another thing that’s notable — and a refreshing change to many current Hollywood movies — is the diverse cast, led by Hermione being played by Swaziland-born actress Noma Dumezweni.

As much as “Cursed Child” looks to the future of the Harry Potter world, the Warner Bros. tour about 20 miles northwest of London looks at its history — dating back to the first shots of Daniel Radcliffe, Emma Watson and Rupert Grint when they were cast as preteens.

The Leavesden Studios tour includes many of the movie costumes and explains in intricate detail how the characters and creatures were brought to life. Guests get to see the inside of Hagrid’s half-giant head, bow to a Hippogriff and get terrified by giant spiders.

One of the highlights of the tour is stepping onto the Hogwarts Express, with compartments that are startlingly realistic. A shrunken version of Hogwarts reveals tiny bridges, pathways, turrets and halls that are sized up to real life with the technology of green screens.

You don’t need to study Divination at Hogwarts to know that the enchantment of Harry Potter is not fading any time soon.

See the two Harry Potter genres collide in the photo below, when the cast of “Cursed Child” attended the “Fantastic Beasts” European premiere in London this week.