On Friday, the actor, who played Draco Malfoy, shared a photo on his Instagram page, showing him with three of the actors that played Weasleys in the film series — James Phelps, Bonnie Wright, and Rupert Grint.

Felton captioned the picture, “secretly draco always wanted to be a redhead.” 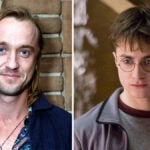 Phelps, who starred as Fred Weasley (alongside his twin brother, Oliver Phelps, who played George Weasley), chimed in, writing, “Same!”

Felton captioned that post, “wtf dad,” a reference to his dog, Willow. The pup was dressed up in a red and yellow Gryffindor scarf.

The 20th anniversary of the first Harry Potter film occurs on Nov. 14.