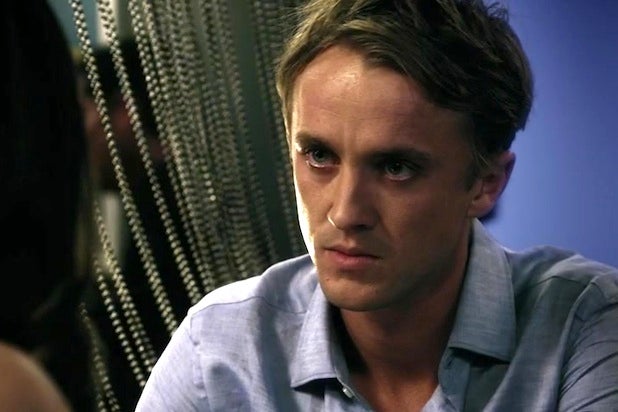 For the role, the 26-year-old and co-star Minka Kelly had to shoot their half-hour episode together in one 14-hour day, which proved challenging for the movie star.

“Contrasting to the days of ‘Harry Potter’ — we’d get 30 seconds done in an entire day — it was new to me and a challenge,” Felton told TheWrap and other reporters at press event for the DirecTV drama.

“I was pretty nervous when we started to see if we’d hit the ground running or if whether it would take a long time to go,” he continued. “Without question, it was the most intense day of my life. Emotions were coming out when I didn’t want them to or need them to but ultimately it helped in the performance. No one really had a chance to stop and get their phones out or go make a cup of coffee. It was just back-to-back and off we go.”

On the series, each episode features a different couple whose stories weave into the other episodes. Felton plays Tim, a British college student having an affair with a married woman played by Kelly. With plans to return home, Tim begs the woman to leave her husband and family for him.

“Minka’s an incredibly talented person,” he said of his co-star. “It was nice, because you never really saw two takes that were the same. She was always switching it up.”

With so little time to build chemistry with each other, the pair read lines together over Skype.

“The chemistry was something that came a day before we shot,” he said, “which is nice.”

While most of the actors had two back-to-back episodes, Felton felt lucky to appear on the premiere episode and then again on its tenth and last episode after a three week hiatus between them.

“I quite like it in the respect that we get to see the longest journey for Tim,” he said. “Who he is in Episode 1 is a world away from where he is in the tenth episode. So, I feel lucky that we get to show, without revealing too much, that he’s slightly more ambitious ever more slightly more juvenile in the first episode. But come the tenth, he has been given more time to grow and mature, really.”

And while many child stars can find that the same role that made them famous can later hamper their career, Felton is still thankful for what the $7.7 billion-grossing “Harry Potter” franchise has done for him.

“It’s definitely not a burden,” he said. “It’s taught me everything I know pretty much for acting and just general set presence. I think it’s been a good thing. The character I played on ‘Harry Potter’ was a very strong, evil wizard, which is quite a bespoke role. I haven’t seen anything too close to that since then. I generally feel most times I walk into a room to meet someone they’re shocked at my appearance and that I’m not evil. That kind of plays to my advantage.”

Felton’s next television project is a pilot for TNT called “Murder in the First,” on which he plays a charismatic Silicon Valley company CEO with a vicious side.

“The goal of the last couple years, I think, is just to do as many contrasting roles to Draco as possible, as much as I love to play an asshole,” he said. “Luckily, the last few ones have been very contrasting from that and I’m looking forward to seeing people’s reactions to that.”