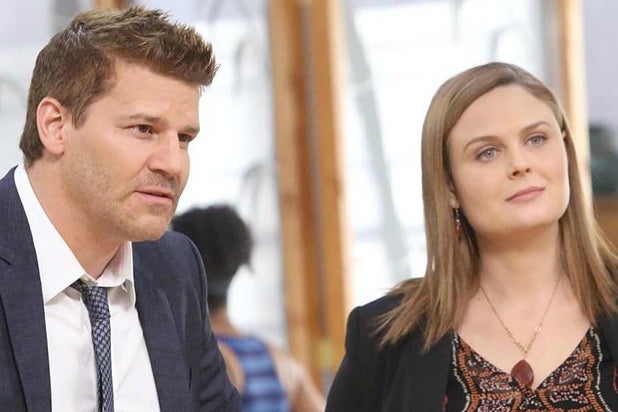 Brennan and Booth question a yoga instructor after finding out that their latest victim, Micah, worked there.

“Bones” creator Hart Hanson told the Television Critics Association press tour that it wasn’t his decision to end the show after 12 seasons–but that’s not a bad thing.

“It wasn’t our decision,” Hanson said. “We were told it was our last year. It wasn’t that we called the network and said, ‘We’d like to finish now.’ I’m not sure anyone is terribly upset or terribly shocked it’s the last year. We had a really good run.”

Over the closing 12-episode run, producers plan to bring back “fan-favorite guest stars and ‘squinterns,’ as well as an old flame from one of the team’s past,” Fox said back in October.

The show has had a rocky relationship with Fox, bordering on cancellation many times throughout its long run.

“The first thing I remember is being picked up for a back nine and being astounded that we got our second part of our first season,” Hanson said. “Then we were on the bubble all the time. I felt like I was angry all the time, calling the network and asking for more promos all the time.”

“We started being switched around the schedule and this thing happened where our fans–who are loud and passionate and very opinionated–followed us,” he continued.

Ultimately, Hanson believes it was the loyalty of the fans that allowed the series to survive four different network presidents and 20 time slot changes.