“What We Do In the Shadows” star Harvey Guillén’s latest project is based on the true story of someone he knew in college who came out as a gay man, only for his identity suppressed by his own family after he died.

During his college years, Guillén walked in on his roommate and one of his classmates being intimate. Guillén encouraged his classmate to come out to his family, even though the roommate begged him not to. The classmate came out, but a week later, he was mysteriously found dead. At his funeral, his parents were so embarrassed, they never acknowledged at his funeral that their son was gay, and claimed he died of a heart attack.

“I was like, that wasn’t your son. Your son wasn’t those things. You don’t even know your son,” Guillen said on a panel on Sunday night at the Latinx House at Sundance. “That’s when I realized, people are going to tell your story unless you’re telling your own story, so you need to control the narrative. So we need to control the narrative of the history we’re making today.”

Also Read: Where Are the Latinos at Sundance - and How Can Hollywood Really Help? | PRO Insight

Guillén was one of five speakers on a panel titled LGBTQ Representation: Advocating for Greater Visibility in Hollywood, hosted by TheWrap CEO Sharon Waxman and Wrap Women. He was joined by other LGBTQ influencers and filmmakers, including producer Taryn Arriola, GLAAD’s Jeremy Blacklow, actor Frankie Rodriguez and director Patricia Vidal Delgado.

The five panelists shared their own stories of coming up in an industry that’s historically been slow to change and promote inclusion on screen. 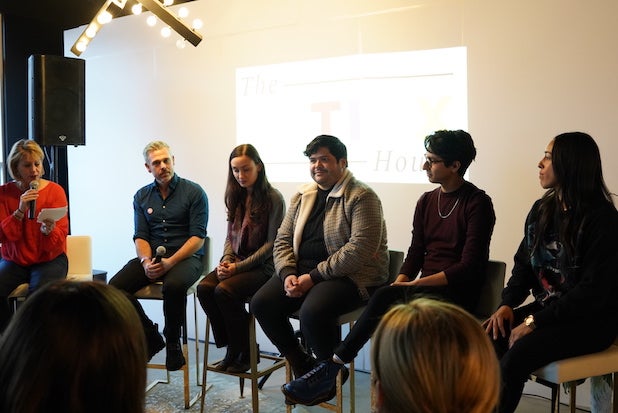 Jeremy Blacklow is the director of entertainment media with GLAAD, and he said that LGBTQ content is in a “new era,” and he can’t even keep up with the number of shows that are being produced today. He also thinks 2020 is in for some “big moments” in terms of advancing the acceptance of LGBTQ characters in blockbuster films around the world.

He touted a new film premiering at Sundance called “Disclosure: Trans Lives on Screen.” He pointed out that trans characters have been on screen in the 100 years of cinema, but they’ve been portrayed as jokes or as outsiders by writers who don’t speak for the community.

Rodriguez plays an openly gay star on the Disney+ series “High School Musical: The Musical – The Series,” and for him, being able to tell his own stories meant finding an agent who would fight for him and help him avoid being typecast.

“For me, it was trying to find an agent that was going to step up and push down doors for me,” Rodriguez said. “Now I feel like I can do everything. So watch out.”

“It’s important for them to have a chance to showcase their talents,” she said.

Arriola is a producer on a handful of in-development projects, one of which she stresses is more than just a “gay” story.” She says that making sure that LGBTQ stories are universal is a way of making sure that stories aren’t being pushed out from the conversation.

“It’s the story of a human who ended up being a gay man,” Arriola said. “We can all make it. We don’t have to fight over the same slice of pie.”