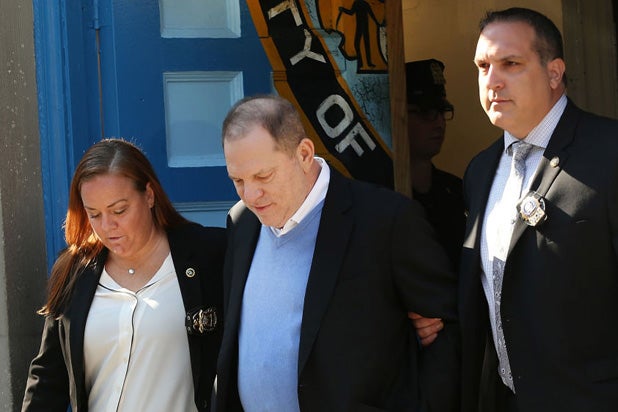 Harvey Weinstein was arrested on Friday in New York City on three felony charges of rape and criminal sex act stemming from a months-long investigation by the NYPD into accusations by multiple women.

Though the Hollywood mogul has been accused of misconduct by more than 80 women, the criminal charges by New York prosecutors stem from the accusations of two women. The first-degree criminal sex act charge comes from a case involving aspiring actress Lucia Evans in 2004.

The two rape charges stem from an unidentified accuser who accused Weinstein of keeping her against her will in a room at the DoubleTree Metropolitan hotel in midtown Manhattan in 2013. According to the complaint, Weinstein “engaged in sexual intercourse with informant by forcible compulsion, to wit, defendant penetrated informant’s vagina with his penis and, at the time of the incident informant had clearly expressed her lack of consent to the act.”

Weinstein entered a not guilty plea and was released on $1 million cash bail. He will have to wear a monitoring device around his ankle, and is expected to surrender his passport and have restrictions placed on his travel.

“The NYPD thanks these brave survivors for their courage to come forward and seek justice,” a police spokesperson said. “The arrest and ensuing charges are the result of a joint investigation between the NYPD and the Manhattan District Attorney’s Office.”

Weinstein’s attorney, Benjamin Brafman, called the charges “constitutionally flawed and not factually supported” and predicted the mogul would be exonerated.

“I anticipate that the women who have made these allegations, when subjected to cross examination, in the event we even get that far, that the charges will not be believed by 12 people, assuming we get 12 fair people who are not consumed by the movement that seems to have overtaken this case,” he added.

The Oscar-winning producer is still under investigation by authorities in London and Los Angeles for accusations made by other women. Federal prosecutors are also looking into whether Weinstein’s conduct broke federal stalking laws and reviewing his finances on possible fraud charges, according to the New York Times.

He also faces several lawsuits, including a class-action RICO suit filed by several of his accusers and a separate one filed by actress Ashley Judd, who accused him of sabotaging her career.

Weinstein, 66, surrendered to authorities at Manhattan’s first precinct in Tribeca, just blocks away from the offices of his former film and TV empire, The Weinstein Company (and before that, Miramax) which he had founded and run with brother, Bob Weinstein. The company filed for bankruptcy in March, and was acquired by Lantern Capital earlier this month for $310 million.

He was fired by TWC’s board just days after the New York Times first reported accusations of misconduct over decades — and was subsequently expelled from the academies that sponsor the Oscars, Emmys and BAFTA Awards as well as the Producers Guild of America.

Evans, now a marketing consultant, told The New Yorker last October that Weinstein forced her to perform oral sex on him in his office in 2004.

Evans told The New Yorker  she was an aspiring actress when she met Weinstein at a New York club in 2004. She said she agreed to meet him at the offices of his first film company, Miramax, for a work meeting. She told The New Yorker that during the meeting, Weinstein pulled her head down and forced her to perform oral sex on him, despite her continuous resistance.

Ronan Farrow, who won a Pulitzer Prize for his exposé on Weinstein, reported that “Boardwalk Empire” actress Paz de la Huerta gave statements to New York investigators on two occasions and expressed a willingness to testify though her case has not resulted in criminal charges as yet.

Many of the accusations of sexual misconduct by Weinstein that have come to light are past the statute of limitations. But according to the Times, Evans’ case and that of the unnamed woman are exempt from expiration because they involved forcible compulsion.

Details of the second accuser’s accusation are not yet known.

New York Times reporter Jodi Kantor, who along with her colleague Megan Twohey, broke the Weinstein story last October, on Thursday tweeted a list of some of Weinstein’s most bone-chilling threats adding, “not anymore.”

“One phone call and you’re done.”

“I have eyes and ears everywhere.”

“I’m Harvey Weinstein, you know what I can do.”

At least 80 women have accused Weinstein of assault, harassment and inappropriate conduct.

The avalanche of accusations against the Oscar-winning mogul spawned the global #MeToo movement, throwing a spotlight on sexual misconduct in the workplace across many industries.

In 2015, the Manhattan district attorney’s office Weinstein began looking into Weinstein after Italian model Ambra Battilana accused him of groping her breasts. But the office of DA Cyrus Vance ultimately decided not to prosecute — a decision for which it has faced steep criticism.

The next court date is set for July 30.