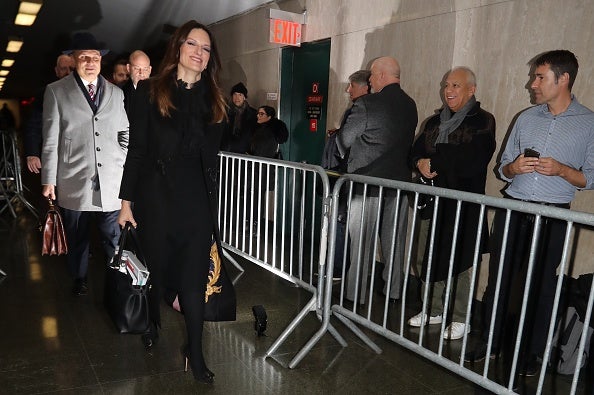 Donna Rotunno is pictured arriving on the15th floor of Manhattan Criminal Court on February 13, 2020 in New York. Rotunno was expected to give closing statements today in the trial of Harvey Weinstein. (Photo by Alec Tabak/NY Daily News via Getty Images)

Harvey Weinstein’s defense team laid out a sweeping closing argument on Thursday of their side of the case for one last time before the jury begins deliberations.

Dressed in all black, Donna Rotunno — one of Weinstein’s lead attorneys — stood before the seven men, five women jury and urged them to use their “New York City common sense” as a “beacon of light” that would help them make an “unpopular” decision: finding Weinstein not guilty on all counts.

“You don’t have to like Mr. Weinstein. This is not a popularity contest,” Rotunno said. “If you look at the evidence and say, ‘Maybe he’s guilty, probably he’s guilty,’ that’s not enough. … Stand your ground.”

Also Read: Harvey Weinstein's Defense Wanted His Surgeon to Testify to Prove He's Not 'Faking It' With His Walker

Rotunno then attacked the prosecution’s opening statement, which painted a picture of Weinstein as a predator who had a similar M.O. when choosing and assaulting his victims.

“The government has to weave a story because, without the story, they know that if you had to look at the evidence alone, from their perspective, they lose. … The irony is that the ADAs [assistant district attorneys] in the case are the producer, and they are writing the script. In their story, they’ve created a universe that strips women of common sense, autonomy,” Rotunno said. “In their universe, women are not responsible for the parties they attend, the men they flirt with, the choices they make to further their own careers, the hotel invitations, the plane tickets they accept.”

She then honed in on the two women whose accusations form the basis of the charges: Miriam Haley (née Mimi Haleyi) and Jessica Mann.

Haley, whose account informs one first-degree criminal sexual act charge and one predatory sexual assault charge, testified that in 2013, after finishing up a stint as a production assistant, she was invited to meet with Weinstein at his SoHo apartment. It was there that she alleged he backed her into a bedroom, pulled her tampon out, and performed oral sex on her despite her protestations.

Rotunno displayed a timeline of Haley’s interactions with Weinstein before the jury to highlight how she met up with him again and had a non-forcible, consensual sexual encounter; reached out to Weinstein for tickets to movie premieres; and requested a meeting with him to pitch a TV show.

Rotunno then attacked Haley’s credibility and character by describing her as a “flirtatious person” who was aware of Weinstein’s intentions and referred back to a statement Haley made during her testimony about being concerned Weinstein “didn’t like [her] as much” after she rejected his offer to go to Paris with him.

Also Read: Weinstein Lawyer Donna Rotunno Sparks Outrage by Saying She's Never Put Herself in a 'Position' to Be Assaulted

Switching her slides over to Jessica Mann’s case, Rotunno again made the argument that the incident behind the first- and third-degree rape charges against Weinstein were consensual and don’t “rise to the level of a rape.”

Mann testified that in March of 2013, Weinstein raped her without using protection — after injecting his penis with medication — in a New York hotel. She said the mogul grabbed her hands and demanded that she undress.

“I gave up at that point, and I undressed and he stood over me until I was completely naked, and then he told me to lay on the bed. And once I was naked and laying on the bed, he walked into the bathroom” and injected his penis with medication, Mann said.

But Rotunno said the interaction amounted to a “negotiation,” not “a rape,” because Mann agreed “to do what has been discussed.”

“She does not say at that point that she tries to push him off,” Rotunno said. “What does she do? She gets naked and lies on the bed.”

She then brought up Mann’s friendly emails with Weinstein, particularly ones where she shared her new phone number with the producer, to ask the jury how one could “reconcile this behavior.”

Then, Rotunno brought up how upset Mann became while she was on the witness stand over the course of three days.

The prosecution will be the last to makes its closing argument, with Assistant District Attorney Joan Illuzzi giving her summation before the jury on Friday morning.

Jury deliberations begin next Tuesday, following the Presidents Day holiday. Weinstein faces five felony counts — two charges for predatory sexual assault, and one charge each for a first-degree criminal sexual act and first- and third-degree rape. He has pleaded not guilty and denied accusations of nonconsensual sex.