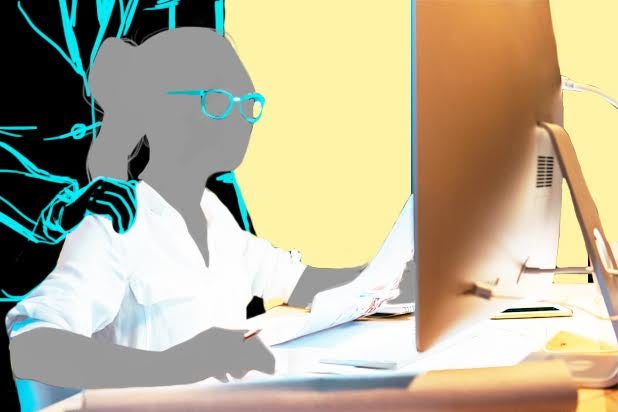 (Editors note: TheWrap initially published this story in August 2016. Because the Harvey Weinstein accusations have renewed focus on sexual harassment, we are running it again today.)

Imagine this: You’ve just landed your dream job. You think it’s your lucky break when a male supervisor takes you under his wing to “mentor” you. You become friends. Then the comments begin: “You look so pretty today”; “you are special.” You feel a knot in your stomach. Your pulse quickens; you laugh it off; you deflect. It escalates.

He begins touching your lower back, grabbing your buttocks, running his hands down your shirt. He reaches for your private area, dangling the promise of a raise. You’re increasingly uncomfortable, but you don’t know what to do. Risk your career and complain? Say nothing and pray it stops? Give in?

If you think the above scenario cannot happen to you or anyone you know, think again. In 2011 alone, federal and state agencies received 11,364 complaints of sexual harassment. Of those, 84.7 percent were filed by women.

Our firm has represented thousands of victims of sexual harassment over the past 40 years. Women of all colors, shapes and ages in varying positions, from interns to high level executives, can be victims of sexual harassment. What they all share is that they have been sexually harassed in the workplace by someone who had more power than they did and who abused their power.

Although Donald Trump’s son, Eric, has stated, “Ivanka is a strong, powerful woman” who wouldn’t “allow herself to be subjected” to it, even the strongest and most successful of women can be, and often are, victims of sexual harassment.

Former Fox News anchor Gretchen Carlson and producer Shelley Ross both alleged they were victims of sexual harassment by their boss, Roger Ailes. The “casting couch” problem in Hollywood is also notorious; many directors have been accused of demanding sexual favors in exchange for roles.

Countless employees around the country do not know what to do when faced with sexual harassment in the workplace. If you are sexually harassed at work by your employer, your supervisor or co-worker, or because of your sex, here are tips to follow to support your claims:

Federal and California law recognize various types of sexual harassment as illegal because it is a form of sex discrimination, and it is denial of an employee’s right to enjoy equal employment opportunity. EEOC guideline 29 C.F.R. 1604.11 states “(a) Harassment on the basis of sex is a violation of section 703 of title VII. Unwelcome sexual advances, requests for sexual favors, and other verbal or physical conduct of a sexual nature constitute sexual harassment when (1) submission to such conduct is made either explicitly or implicitly a term or condition of an individual’s employment, (2) submission to or rejection of such conduct by an individual is used as the basis for employment decisions affecting such individual, or (3) such conduct has the purpose or effect of unreasonably interfering with an individual’s work performance or creating an intimidating, hostile, or offensive working environment.” Harassment does not have to be of a sexual nature, however, and can include offensive remarks about a person’s gender.

Many women suffer silently after being sexually harassed out of fear of retaliation. Admittedly, even though retaliation is illegal, there is no guarantee an employer will not engage in such behavior. To remain silent, however, and hope the problem will go away on its own rarely works. Harassers typically escalate their behavior to the point where an employment relationship is no longer possible for the victim. Further, harassers typically do not victimize only one individual, but often harass others. Thus, asserting your rights can make all the difference in stopping a cycle of abuse and affecting real change in the workplace.

View In Gallery
BIO Gloria Allred and Christina Cheung
Gloria Allred is a founding partner of the law firm of Allred, Maroko & Goldberg, which has offices in Los Angeles and New York and handles more women's rights cases than any other private law firm in the nation. It has won hundreds of millions of dollars for victims. Christina Cheung joined as an Associate in September 2011. She previously worked at the Department of Justice Civil Rights Division's Employment Litigation Section.

Gloria Allred is a founding partner of the law firm of Allred, Maroko & Goldberg, which has offices in Los Angeles and New York and handles more women's rights cases than any other private law firm in the nation. It has won hundreds of millions of dollars for victims. Christina Cheung joined as an Associate in September 2011. She previously worked at the Department of Justice Civil Rights Division's Employment Litigation Section.