Maher kicked off the interview calling the former White House chief strategist and executive chairman of the far-right’s Brietbart News “one of the most influential [people] around” and thanking him for his openness to appearing on his show – unlike many Democrats. Maher said Bannon’s appearance speaks volumes about why Republicans are in power.

At one point Maher complimented Bannon while pointing out that he championed Sarah Palin and then Donald Trump. “I think you look for morons who are empty vessels that you can put your ideas in,” Maher said.

Also Read: Bill Maher Says Trump Is a Lot Like God (It's Not a Compliment) on 'Real Time'

Bannon defended Trump, calling him “incredibly smart” and said his motive for igniting the trade war with China was to bring back jobs to America. When Maher tried to get Bannon to talk about the many “racists” in the populist movement, Bannon didn’t bite.

You can watch the full video at the bottom of this page.

The absence of rebuttal or follow-up questions from Maher drew ire from many liberal viewers. Here are just a few:

“What the hell happened to Bill Maher?” one Twitter user asked. “This spectacle of basically letting Bannon say whatever he wants, unchallenged, is just sad.”

What the hell happened to Bill Maher? I mean, he’s always been a bit of a jackass, but he used to at least be a confrontational, in-your-face fighter in debates. This spectacle of basically letting Bannon say whatever he wants, unchallenged, is just sad. https://t.co/HgJzPjTIjo

As opposed to what Bill Maher wants you to believe, it's NOT courageous to give a national platform to white Supremacists like Steve Bannon-But Maher did that last night. It's courageous to crush bigotry but Maher didn't do that- he gave Bannon a massage https://t.co/5IK2i8Xok9

Has Bill Maher lost his mind??

He has Steve Bannon on. Thanks him for being on the show. Says it speaks volumes about why the Republicans are in power. Says Hillary never came on and maybe she would be president if she were more confident.

IS THIS THE F*CKING TWILIGHT ZONE?

Agreed. There's no need to give #SteveBannon a "voice" for his racist rants!!

@billmaher if you ever put Steve Bannon on your show again I WILL PERMANENTLY CUT YOU OUT OF MY LIFE!!
DON’T EVER DO THAT AGAIN!!#boycottbillmaher

Am I really seeing Bill Maher relate to and defend steve Bannon?! Dude, you are too high to see how stupid this is. #RealTime

The Hobo King was on your show. Not the 1st time you've tried to debate a ridiculous Nazi. You're turning into the #MSM normalizing this shit. Wow! Congrats! You're the King of Free Speech. #RealTime #BillMaher #SteveBannon #TrumpNazi pic.twitter.com/x3Hc1w2AtW 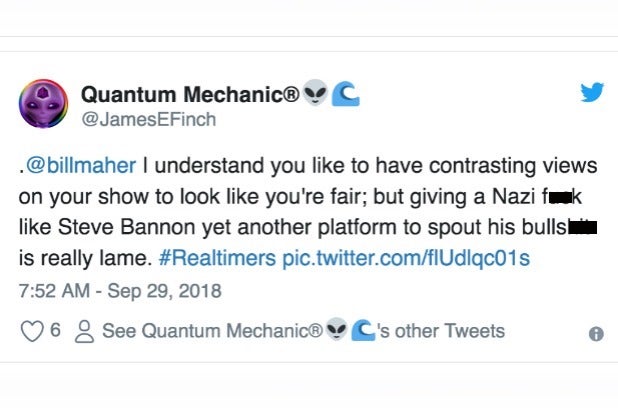 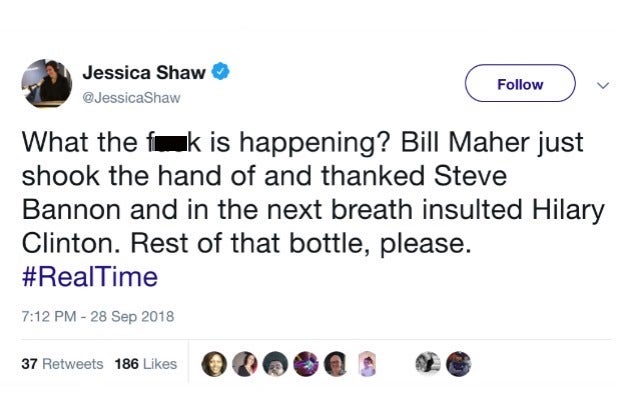