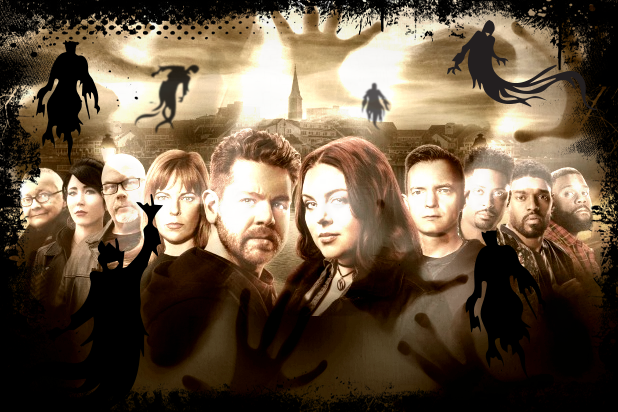 There’s nothing like hunting for the dead on a show that is live — and that takes us to one of the country’s most legendary spooky cities — Salem, Massachusetts — on the Travel Channel’s “Haunted Salem: Live,” a four-hour paranormal lover’s dream stakeout on Oct. 4.

And the coolest part? Through an on-location, live video stream, fans can monitor the activity on Travel Channel’s Facebook live feed and comment and tell the investigators, “Look out behind you!” and “Uhhhh… did you hear that?” if they feel inclined to help.

Also Read: Ghosts, Spirits and Spooks Take Over the Travel Channel for 'Ghostober'

“If there’s any place that has echoes of the past, it would probably be Salem,” Weidman told TheWrap. “On top of that, even just going off of eyewitness accounts, a lot of people have had paranormal experiences for centuries in Salem. So, is that all in their mind? Is it something more tangible? There’s a lot of debate about that, but I think the fact remains that for a very long time it’s really captured people’s imagination.”

Described as one of the most notorious cases of mass hysteria in American history, more than 200 people were accused of practicing witchcraft and 19 of them (14 women and five men) were found guilty and executed by hanging in 1692-1693. An additional man was crushed to death for refusing to plead guilty and at least five more died in jail.

“We’re coming there to conjure up [spirits],” Coffey says. “This is a city that is deep and rich in history and, not all the history is like a pleasant, fun, happy kid’s dream. There’s that sad and supernatural connection in Salem. It’s… I don’t want to use the word funky, but I’m gonna use the word funky. There’s funky energy there.”

The live-interactive element gives the viewer a chance to feel a part of the investigation. “We’ll have millions of extra eyes watching along who can let us know if anything is happening in the background,” Bruni, who will be investigating the Proctor House with Berry and Coffey, said.

Osbourne adds, “Everyone is along for the ride, which is kind of cool. I also think it pulls back a bit of the naysayers because they get to sit there and watch it as it’s happening. You know, we don’t fake stuff. I always find [that being live] is a great tool to kind of cut through a lot of the naysaying.”

All that may be true, but there are concerns that are more, shall we say, human.

“The downside is Katrina and I are going to have to be on our best behavior,” Osbourne joked. “Katrina and I tend to swear like pirates.”