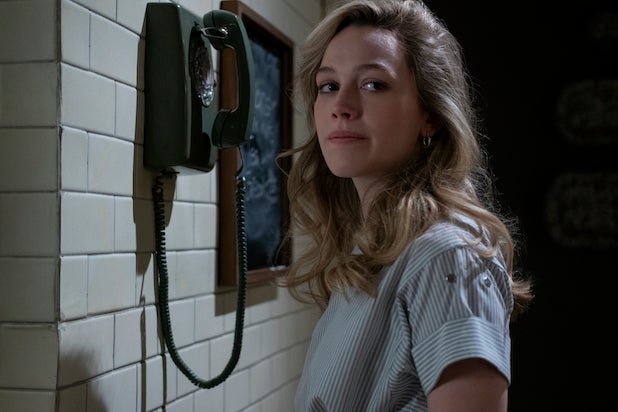 (Warning: This post contains major spoilers for the finale of “The Haunting of Bly Manor.”)

In Netflix’s “The Haunting of Bly Manor,” Mike Flanagan’s followup to his 2018 hit “The Haunting of Hill House,” young teacher Dani Clayton (Victoria Pedretti) comes to Bly Manor to become a nanny to the peculiar but precious Flora (Amelie Bea Smith) and Miles (Benjamin Evan Ainsworth), totally unaware of the actual job she’s taking on. And with that job at a very haunted house comes big sacrifices Dani will end up making as a result of her commitment to both the children and Jamie (Amelia Eve), the estate’s groundskeeper, who she ends up falling in love with.

At the start of the season finale, “The Beast in the Jungle,” Dani runs after the Lady in the Lake/Viola (Kate Siegel), a ghost who has been haunting Bly for centuries and has scooped up Flora, who Viola believes to be her long-dead daughter, and is planning on dragging her down to join her in her watery grave. Dani makes it to the edge of the water and shouts into the night, “It is you. It is me. It is us,” a phrase she learned when Miles said it in front of her to let the ghost of Peter (Oliver Jackson-Cohen) into his own little body. For whatever reason, it works, and the Lady in the Lake lets go of Flora and goes into Dani.

Pedretti told TheWrap that despite the fact what Dani did for Flora was a giant sacrifice, “I don’t understand how anybody could think that this person could turn away at that moment and not do what she did.”

“She doesn’t want her to deal with any of the stuff she had to deal with,” the “You” star said. “I think that if we are treating children right, we should treat them better than how we’ve been treated. We need to know that just because this is the way we have treated children, or what we’ve expected from children or what children are capable of understanding even, really minimized that for the sake of continuing these horrible cycles of abuse. I don’t think that Dani is willing to allow a little girl to die just so she has to deal with some discomfort. We have to be comfortable with sacrificing for the greater good, for future generations. It’s completely different with another adult, right.”

While Dani’s choice there is a big one, it’s far from the final tough decision she makes in the “Bly Manor” finale, which ends with the nanny’s decision to leave Jamie after years of bliss together and return to Bly to commit suicide, knowing that Viola’s spirit is starting to take control of her body and the woman she loves is no longer safe around her.

“There used to be a scene that me and Amelia shot where Jamie actually wakes up as Dani is trying to leave and she confronts her and tries to get her to stay and in that moment, I think you can really see how torn Dani is,” Pedretti says. “But at that point, she knows that she’s become something else and that she’s suddenly become capable of doing the thing that she was not capable of doing when Flora needed her — that she could hurt somebody, which is the last thing she wants to do. She could hurt the person she loves the most. She could burden her with this thing that’s killing her. And she’s not willing to make Jamie sacrifice that, because she doesn’t want to be in a relationship where somebody is having to sacrifice to be with her.”

Pedretti added: “They both hold each other responsible fully for their behavior and I think that that’s beautiful. It’s ultimately that she’s like, ‘I’m going to start taking up all the air.’ And I don’t think she could do that. I wouldn’t want that.”

Check back with TheWrap for more “Haunting of Bly Manor” coverage throughout the weekend.