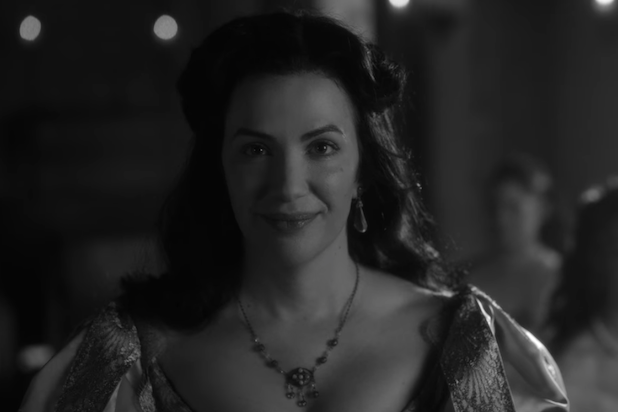 (Warning: This story includes major spoilers for “The Haunting of Bly Manor” finale.)

The eighth episode of Netflix’s “The Haunting of Bly Manor” is a very different installment from the rest, shot almost entirely in black and white and told almost exclusively via the show’s nameless narrator, played by Carla Gugino. And the reason for such a drastic difference between this hour, the penultimate of the season, and those that came before it is because here is where we finally go back in time to learn the story of how Bly Manor became haunted in the first place. It’s a tale of two sisters, Viola (played by Kate Siegel) and Perdita (Katie Parker), and how their intense love for one another killed them both and turned Viola into the Lady in the Lake who haunts Bly Manor.

“It’s sort of experimental. And it takes you away from everybody you love,” Siegel told TheWrap of the episode, titled “The Romance of Certain Old Clothes.” “But in that moment, it puts in me, who plays Theo [in ‘The Haunting of Hill House], who everyone is waiting to see, and it draws you in immediately. And so you don’t have that moment of, ‘What? Where am I? I don’t want to do this. I don’t care.’ You’re like, ‘Oh, there’s Kate! I’ve been waiting.’ Because you knew I was in the show, but nobody up until launch knew what I was in the show. There was none of me in the trailer. I was not allowed to say anything in the press. I wasn’t allowed to say anything on socials. So in that moment when they freeze on my face with [fellow ‘Hill House’ alum] Katie Parker… there’s that moment where you’re jolted out of your comfort zone, but you’re also sucked in by familiar faces.”

Siegel had no idea who she was playing in “Bly Manor” for quite a while, until the day series creator creator Mike Flanagan (who also happens to be Siegel’s husband) and the episode’s writer, Leah Fong, finally told her the story of Viola and Perdita, and how Viola married a distant relative named Arthur (Martin McCreadie) to keep Bly Manor in the family and had a baby, Isabelle, with him. Viola then got very sick and stayed that way for years, clinging to life, refusing to let death take her, until one day Perdita — sick of her sister’s anger and jealousy over Perdita growing close to Arthur and Isabelle — suffocates her to death.

Viola later returns the favor, when her ghost — which was trapped inside a trunk full of dresses she wanted to give her daughter — strangles the life out of Perdita, who is now married to Arthur, for trying to take those clothes and sell them. Viola’s spirit, still inside the chest, is then thrown into the lake at Bly. That is how she becomes the Lady in the Lake, who spends her nights wandering back into the manor, looking for her daughter and killing residents that get in her way, trapping them on the grounds for eternity, too.

“And I cried and I was like, that’s amazing. And that had a pretty cinematic quality, that sense of, I wasn’t forgotten! I get to play, too. And I got to kill a bunch of people! I got to be the most terrifying thing.”

Though this episode of “The Haunting of Bly Manor” does center on a love triangle, Siegel says “the love story” is truly between the sisters.

“Arthur, he’s handsome and charming, but really not the thing. And that was something that Katie and I grabbed onto right away. And so when you take a love story, a Gothic love story, and you make it something that isn’t romantic, but instead familial– there are all these signposts in a love story that you need. You need passion, you need sex, you need rage, you need jealousy. And we wanted to make sure that they were all there, but through the lens of family. Like, we didn’t want any ‘Flowers in the Attic’ creepiness, but we wanted to make sure that people believed these two sisters loved each other — and that was the problem. The passion, the revenge, the jealousy, the intimacy, the care, the abandonment, all of it, was under this sort of umbrella of love, this perverted love that when you pull back the curtains or looked under the bed, there were the dead bodies and the ghosts. The truth of the matter is that these two sisters desperately loved each other and it ate them alive. It killed them.”

Siegel played Viola, but the faceless version of Viola, the Lady in the Lake that viewers come to know much earlier in the season for killing Peter (Oliver Jackson-Cohen) and many others, was played by Daniela Dib. Siegel says Dib is the one who carried little Flora (Amelie Bea Smith) into the lake in the finale, thinking she was her daughter. The Lady in the Lake would have drowned the poor girl if Dani (Victoria Pedretti) hadn’t cries out some very important words to stop Viola’s ghost dead in her tracks and allow her to possess Dani: “It is you. It is me. It is us.” As fans know, thanks to Episode 8, that is what Viola said to Isabelle when she was born.

“There are these moments in our lives — most of our lives pass by like rushing water and you grab little droplets here and there, but I think people have these signpost moments in their lives that they go back to,” Siegel said. “Your first kiss or your wedding day or the first time you were really bullied. Traumatic and beautiful moments in harmony. And I think for anyone who has had a child, the first time you hold your child outside of your body in your arms is something that imprints on you like nothing else. It is like you are branded with this divine love for something outside of you. And that is true with Viola, one of the most selfish characters I’ve ever had the pleasure of playing. Viola was completely single-minded about what Viola needed until the evening she held her child. And in that moment when she says to her, ‘It is you. It is me. It is us,’ that is a profound change in that woman. It is the only time she has truly included another being in herself.”

“She always kind of used Perdita, she used Arthur, but when her daughter shows up, she includes her. And so I think by Dani invoking that phrase, it is such a profoundly true moment that it’s maybe the last thing Viola could hold onto,” Siegel added. “Because it is what was keeping her at Bly, the reason she stayed in that room, the reason she stays on the manor is because she needs her daughter, her other half. And so I think when Dani says that, that’s why she allows Dani to let her in, that’s a combination of the two of them, similarly to the way that Viola was allowing her daughter to be an us.”

At the end of “The Haunting of Bly Manor,” we find out the Gugino’s character, responsible for telling the story of Bly to some eager listeners at a rehearsal dinner, is an older version of Jamie, the groundskeeper Dani fell in love with. Their relationship continued for several years after Viola had entered Dani’s body, until Dani decided she was being taken over by Viola and had to go back to Bly and throw herself into the lake to protect Jamie. When Jamie returns to the lake and tries to make the “It is you. It is me. It is us” phrase allow Dani into her body, it doesn’t work. Siegel says that’s for two reasons.

Also Read: 'Haunting of Bly Manor' Star Victoria Pedretti on Why Dani Makes That Big Sacrifice - and That BIGGER Sacrifice

“A magic talisman never works twice. That’s just a rule of magic, you use your magic sword and then the light goes out. So the magic button of, ‘It’s you. It’s me. It’s us,’ once used on the Lady in the Lake, it’s kind of lost its power. And the other is, in all of our relationships, true intimacy changes you. So true intimacy, which was achieved by Dani and the Lady in the Lake, Dani and Viola, changed both of them. They took each other in, they truly possessed each other, something Viola had never allowed to happen to her or done… But having done that, both people are forever changed. And so now Dani can exert power where she couldn’t before and Viola can receive power, can receive change from Dani, where she couldn’t before, because of intimacy. That’s what makes it a gothic love story.”