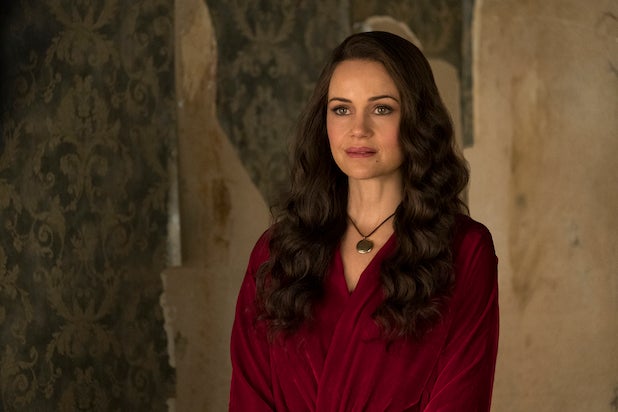 “Haunting of Hill House” fans shouldn’t expect Olivia Crain to return for the next chapter of Mike Flanagan’s Netflix horror anthology — partly because she’s way dead and partly because it was previously revealed Season 2, “The Haunting of Bly Manor,” is going to be an all-new story, with all-new characters.

But that doesn’t mean you have to rule out the return of Carla Gugino (who played the Crain family matriarch), because the actress tells TheWrap she’s “talking a lot” with Flanagan about coming back. It’s just all going to come down to timing.

“Well, I can’t say anything definitive at this point, other than Mike and I really love collaborating and working together and any opportunity where a schedule allows for us to do that, we will, and I would be honored to,” Gugino told TheWrap, during an interview ahead of the premiere of her new Cinemax series, “Jett.”

Also Read: 'Haunting of Hill House' Star Oliver Jackson-Cohen Will 'Get Shot' if He Tells Us He's in 'Bly Manor'

“So we’re talking a lot about it and we’ll just see if all schedules allow,” Gugino, who also starred in Flanagan’s 2017 film “Gerald’s Game,” added. “All I can say is I’m very excited for Season 2 and to see what Mike does.”

Gugino is not the only “Hill House” star who has been unable to say definitively if they will appear in “Bly Manor”; Oliver Jackson-Cohen recently told TheWrap he’d “get shot” if he confirmed one way or another.

The story follows the events that transpired during the one summer the Crains lived in the eponymous haunted home and their lives decades after leaving due to a tragic incident.

Now called “The Haunting,” the series was turned into an anthology and renewed for a second season back in February, as part of a multi-year overall TV deal with Flanagan and executive producer Trevor Macy. The day that news broke, Netflix revealed “The Haunting of Bly Manor” was the title of Season 2, which would be based on Henry James’ horror novella, “The Turn of the Screw.”