Warning: The following contains spoilers for the first two episodes of “Hawkeye”

We’re two episodes into “Hawkeye,” and already one of the more delightful things about the latest Disney+ Marvel Cinematic Universe series is Jack Duquesne, played by the always great Tony Dalton — clearly having a damned blast in the role.

Personalitywise, Jack comes off as an awkward, earnest tryhard dating Kate’s mom, who really wants Kate to like him. But despite the goofy wannabe stepdad-ness and charming mustache, we also get several red flags.

And well, since all of that feels like obvious foreshadowing, you might be wondering if there’s more to him than that. You would be right. And we’ll get to that momentarily.

So, first, when Kate comes home after doing serious damage to her college’s clock tower, she’s baffled to discover the place is now filled with decorative swords. Later, right after being blindsided by the news that Jack and her mother are engaged, Kate learns he’s friends with some pretty shady people, and he’s apparently got some money problems.

He also likes to attend underground auctions where said shady people bid on illegally obtained, superhero-adjacent goods, including such items as the cool sword and costume worn by Jeremy Renner during “Avengers: Engame,” when he murdered criminals under the alias “Ronin.” Jack really wants that sword, and even though he loses a bidding war for it, he takes advantage of chaos erupting after an attack on the auction by the Track Suit Mafia to straight up steal it. 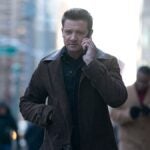 Also Read:
‘Hawkeye’ Episode 1 Recap: The Most Wonderful Time of the Year

The next day, we also learn he’s a highly skilled fencer when he easily bests Kate in a friendly duel only after A) attempting to let her win and then, when she calls him out, B) beating her with a from-behind-without-looking parry when she tries to sneak attack him. He also happens to have some candy taken from his dead (murdered) uncle’s house. HMMMMMMMMMM.

So as we said, that’s a lot of foreshadowing. And for good reason. Jack is actually based on a very old Marvel comics character with a deep and longstanding connection to Hawkeye: The villain known as “Swordsman.”

Created by Stan Lee and artist Don Heck, the flamboyant, swashbuckling Swordsman debuted in “Avengers” #19 back in 1965 as a villainous counterpart to Hawkeye. More importantly, he’s also Hawkeye’s former mentor and surrogate father.

In the comics, his real name is Jacques Duquesnse, who grew up in the fictional nation of Siancong, when the country was under French colonial Rule.

(Fun fact: Originally he was from Vietnam, which was also the setting Marvel used for several other crucial events in the 1960s, including the origin of Iron Man. But after Marvel adopted the sliding timescale, and after the Vietnam war went from current events to history, they retconned most of that to have taken place in Siancong instead.)

As a youth, Jacques fought with Siancong rebels fighting European colonial authorities. But after being betrayed, he left the country, and popped up several years later as the star attraction of a globetrotting carnival. At some point, he met Clint Barton, then a teenage runaway, and began mentoring him in bladed weapons and other skills Clint would later make use of as Hawkeye. (Though Hawkeye acquired his expert bow and arrow skills from a different mentor.)

Jacques also had a drinking and gambling problem; after Clint caught him stealing from the carnival to cover his debts, Jacques tried to kill Clint before leaving to become a traveling supervillain.

From this point on it gets way too complicated to get into, so we’ll sum up Swordsman’s subsequent adventures as “constant comic book weirdness.” Suffice to say, he has been both a villain and (occasionally) an almost-hero, and even had a super weird romantic relationship with Mantis that involved being possessed by a cosmic being. He eventually died, came back, and was killed again, apparently for good, in a 2020 storyline. We’ll see if it sticks.

How Will The Swordsman Fit Into the MCU?

Obviously, the MCU version of Swordsman is going to be very different from his comic book counterpart. Unless Tony Dalton is playing someone decades older than he is in real life, Jack is definitely too young to have served as a mentor for this version of Clint Barton. Instead, it looks like he’s being set up as a villain for Kate Bishop. And for all we know, he might even have a connection to how she learned swordsmanship — though that’s obviously us reaching for meaning in that duel which may not be there.

One thing that will remain the same? Jack’s mustache is pretty much straight out of the comics. Which reminds us — regardless of the changes “Hawkeye” is bringing to the character, here’s hoping he isn’t killed off. Tony Dalton is having way too much fun to waste that way, ok Marvel?