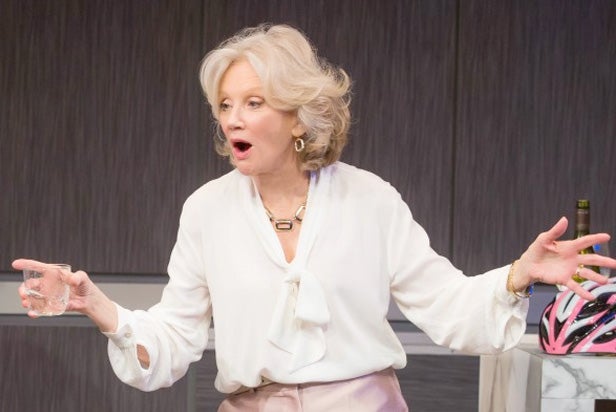 They both became child stars by playing the same set of twins, albeit almost 40 years apart. For many, when they think of “The Parent Trap,” they may think of Lindsay Lohan. But for millions of Boomers, they likely recall the star of the original, Hayley Mills. Most would agree that Lohan’s career, and life, have derailed since: Recently, she was seen in a black hijab at a London fashion show. Before that, of course, there were drugs, rehabs, traffic incidents and more.

As for Hayley Mills, she managed to seemingly disappear for awhile, but it turns out she has led a relatively happy and crisis-free life. Lately, she has been appearing on a New York stage in the Off Broadway comedy “Party Face.” It is a pleasant, if not particularly trailblazing, endeavor and yet throngs of curious ticket buyers have been filling the venue at City Center. Many are curious women who grew up with “Pollyanna” and more importantly, “The Parent Trap.” How would their former idol look at, gulp, 71? Would she sound the same?

The accent and voice are intact, the body is petite, and well, the former child icon is looking very good, as we say these days, for her age.

“It has been absolutely wonderful to have so many people, after the show, saying how they grew up with me,” Mills said. “I think it takes them back to either a happier time, or to their adolescence, and all that meant to them.”

It is worth recalling that Hayley Mills was arguably the most popular child star since Shirley Temple. Though her first film was “Tiger Bay,” it was an English indie, made with her father, the legendary British actor John Mills. But she burst onto screens in 1960’s “Pollyanna,” as the sunny orphan who brought joy to those in an embittered town. The movie begat the new term for the goody-goody optimist — and launched the young star, including earning her an Oscar for a juvenile performance.

That was a Disney film and Walt had his biggest young star since Annette Funicello. His next gift, a year later, was “the Parent Trap,” in which Mills played two twins separated when their parents did the same. She officially became the idol of young girls everywhere, who ran to salons to get their hair cropped and grabbed guitars to sing “Let’s Get Together.” (Which became a hit single.)

They watched her grow up on screen for the next five or six years in movies like “That Darn Cat,” “The Moon Spinners” and “The Trouble With Angels.” She claims returning home to England in between films, as well as being part of a close-knit family, helped keep her on a relatively normal path.

“The whole thing was less crazy in Europe than it was in the States,” Mills said. “It was a great childhood in many respects. I loved the Disney studio, and Walt, and there was never any exploitation. Still, I had to forfeit friends, as I was always leaving my boarding school and struggling to catch up. I believe education is fundamental and mine definitely was impacted. There was a price to pay and that kind of fame can be very isolating. I am only grateful I didn’t become famous in the time of social media.”

Mills did experience at least one taste of nasty gossip. “The Family Way,” in 1966, was considered her first “adult” role and her devoted female followers — dealing with their own budding sexuality — were upset that it included a tiny nude scene, and that the actress, then 20, ended up marrying her 53-year director.

Mills briefly settled down, eventually gave birth to two sons, and tried to manage the juggling act faced by so many women. “I discovered I wasn’t good at just being at home, though I loved being a mother,” she said. “I thought I might give it up, but it was the family business my whole life. My father acted till he was 97. My mother was a playwright and my sister, Juliet, always acted. Both my sons were involved in the arts. It’s a difficult business to escape.”

She and Boulting later divorced, and Mills has been in a relationship — this time with a man 20 years her junior. Though she was largely invisible to us for decades, she has been performing, mostly on stage or in television in England. But she leaped at the opportunity to make her New York debut in Isabel Mahon’s play “Party Face.”

“The script made me laugh,” she said. “I loved that it is written by a woman and stars only women. And I jumped at playing this controlling, misguided, but relatable mother.” (The kind who says to her grown — and dressed to party — daughter, “I’ll tidy up while you go get ready.”) She lamented the fact there are not more such roles. “I’m very fortunate to be getting work at this age,” she said, “though the longer we live, the better we become as actors, as there is more to draw on. But we all know there is a shelf life for actresses.”

Looking back, was it hard to grow up in the public eye? “It’s hard to grow up anyway,” she said, laughing. The voice is the same, but she doesn’t sound like Pollyanna anymore.