The number of women TV directors in primetime increased — a whopping two percent — last season, according to a report released Tuesday by the Directors Guild of America. That’s not real progress, nor was there any for minority directors, whose numbers declined by one percent.

Women directed 16 percent of all series episodes, a gain from 14 percent the prior year, while minority directors accounted for 18 percent, down from 19 percent last year. The hiring of new episodic directors is a significant factor, since they have a lot to say about who’s hired on the shows. But the hiring of female first-time episodic directors went down in the 2014-15 season, from 20 percent to 15 percent.

More than 3,900 episodes produced in the 2014-2015 network TV season and the 2014 cable season from more than 270 scripted series were analyzed in the report, which also identified the best and the worst networks and shows in terms of diversified hiring. The report found that HBO had four series without a female or minority director, more than any other network, and FX followed with three.

HBO’s “Banshee,” “Boardwalk Empire,” “The Brink” and “The Comeback” all had 0 percent women or minority directors. 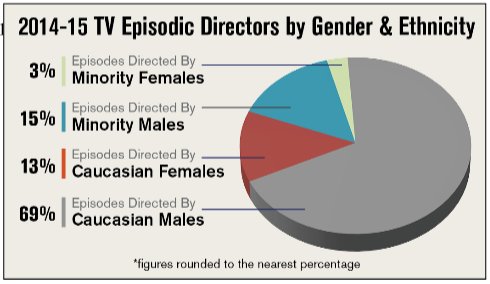 FX’s “The Comedians,” “The Strain” and “You’re the Worst” had three series — and spinoff station FXX had two: “It’s Always Sunny in Philadelphia” and “Man Seeking Woman.”

Not surprisingly, the only network with shows with a 100 percent rating for direction by women or minorities was BET, with three shows: “Being Mary Jane,” “The Game” and “Single Ladies.”

The Fox-produced “Last Man Standing” (left) made a dramatic turnaround, going from the DGA’s “Worst Of” list to the “Best Of” list. The series hired two minority directors to direct nine of its 11 episodes.

On the down side, the Warner Bros.-produced “Supernatural” in the last 10 seasons has hired only three minority male directors, and two female directors, to direct just five out of 197 total episodes. Another long-running show with a poor record of diverse hiring is “It’s Always Sunny In Philadelphia,” which hasn’t hired a female or minority director since the show began production in 2005 and has since completed 115 episodes.

“We hear a lot of reasons from studios, networks and series showrunners about why they are powerless to make a change when it comes to diverse hiring. It’s time for everyone to look closely at exactly how hiring decisions are made, and for employers to take ownership and develop plans outlining the steps they will take to bring their hiring practices into the twenty-first century,” said Bethany Rooney and Todd Holland, co-chairs of the DGA’s Diversity Task Force, in a statement.

Also Read: Why Trevor Noah's 'Daily Show' Hiring Is Big Step for Late-Night TV -- Despite His Tweets and Gender

To read the complete report, including the shows on the “Best Of” and “Worst Of” lists, go to the DGA’s web site.