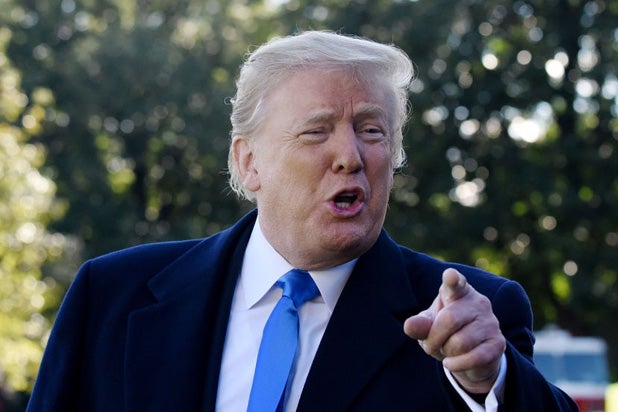 HBO is none too pleased with Trump’s apparent reference to “Game of Thrones” in a Friday tweet shortly after he announced that the U.S. will reimpose sanctions on Iran.

“We were not aware of this messaging and would prefer our trademark not be misappropriated for political purposes,” the network said in a statement.

Friday morning, Donald Trump posted an image with “Sanctions Are Coming” written in a font similar, if not identical, to the one used by the HBO series.

The line “Sanctions Are Coming” is also a riff on the oft-repeated catchphrase “Winter is Coming” from the award-winning fantasy show based on George R.R. Martin’s best-sellers.

In a later tweet of its own, the network added, “How do you say trademark misuse in Dothraki?” — while series stars Maisie Williams and Sophie Turner also chimed in.

On Friday, Secretary of State Mike Pompeo said that the Trump administration will reimpose all sanctions against Iran that had been lifted as part of the 2015 nuclear agreement, according to CNN.

Pompeo said the U.S. will grant temporary waivers to eight “jurisdictions” from energy related sanctions that will be reimposed on Monday as the administration seeks to increase pressure on the Iranian regime.

The 2015 agreement was a signature achievement of former President Barack Obama and a frequent target of Trump’s ire.

How do you say trademark misuse in Dothraki?