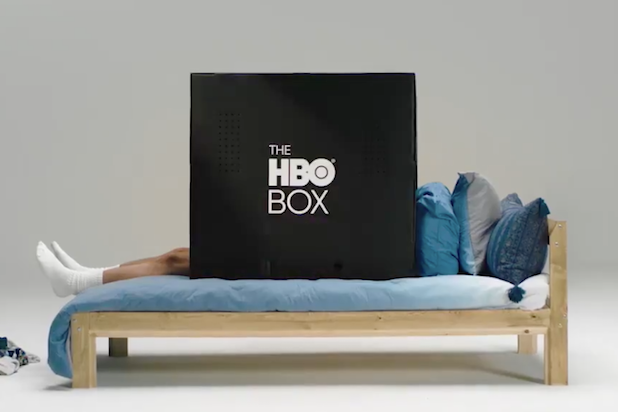 If an annoying roommate is getting in the way of your ability to binge-watch “The Sopranos,” “Game of Thrones” and “Curb Your Enthusiasm,” HBO has a solution for you.

The network is promoting a cardboard box — aptly dubbed the “HBO Box” — that lets its viewers stream in peace. And based on HBO’s promo clip, this isn’t your average cardboard box: the HBO Box comes in a sleek black color, which features holes to let the viewer, uh, breath, and has a nifty shelf that seems to pay homage to George Costanza’s souped-up desk on “Seinfeld.” Put it all together and you have the perfect mini-fortress for blocking out a pesky roommate.

You can check out HBO’s cheeky commercial for it below:

But while it seems like a joke, the HBO Box is 100% real. HBO, together with Fooji, is giving away hundreds of Boxes in the next week.

To get your hands on one, you can respond to Fooji’s Twitter account when they tweet at noon ET asking for submissions. You’ll need to include the box emoji, the #HBOBoxChallenge and #giveaway hashtag, and a brief explainer on why you need the box. The promo runs through Nov. 7. Fooji, the company helping HBO run the promo, told CNET it will be giving away 305 Boxes altogether.

There are a few rules as well; participants have to be 18 or older, have a .edu email address and live where DoorDash or FedEx operate.