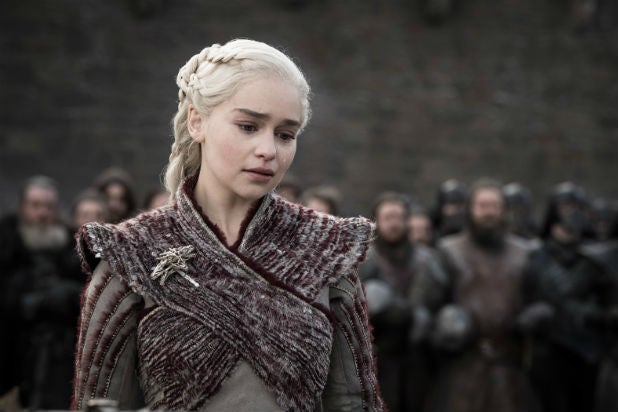 Looks like Daenerys will have to get her caffeine fix another way, as HBO has already digitally removed the coffee cup that was seen sitting in front of Emilia Clarke’s character on Sunday’s episode of “Game of Thrones.”

A representative for the premium-cable channel told TheWrap Tuesday that the beverage that was not meant to make it into Episode 804, “The Last of the Starks,” has been edited out of the version currently available on HBO Go. We’re told it will not be seen in any encore presentations going forward or in the episode that makes into into DVD sets, etc.

HBO got in on the joke Monday after eagle-eyed fans spotted the out-of-place to-go cup with this statement: “The latte that appeared in the episode was a mistake. Daenerys had ordered an herbal tea.”

In an email to media, the pay-TV channel referred to the to-go cup, which many assumed to be from Starbucks based on a somewhat-visible logo, as “a craft services coffee cup.”

Here’s a screenshot we lightened for you:

That cup used to appear at the 17:38 mark on the HBO Go playback. Those Winterfell scenes are shot in Belfast, Ireland — it can get pretty chilly there, so we understand the need for warm beverages.

Sunday’s Episode 804, “The Last of the Starks,” revealed the aftermath of the Battle of Winterfell and Jon Snow’s and Daenerys’ plans to head south and take King’s Landing, and thus the Iron Throne, from Cersei Lannister. But the Lion Queen had her own strategy brewing in the background with Euron Greyjoy. By the end of the one-hour, 18-minute episode, Cersei had directly or indirectly claimed two lives Dany holds quite dear and set the stage for the “last war” to begin this coming weekend.