Barely two days after it premiered, "Treme" has been renewed for a second season by HBO on the strength of its strong reviews 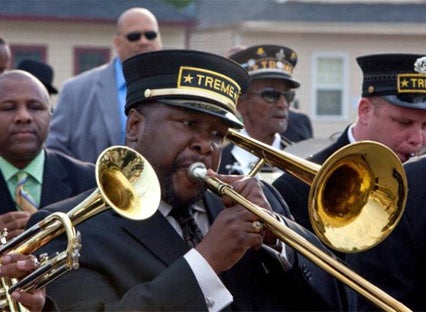 In making the announcement, HBO Programming president Michael Lombardo said in a statement: “I can’t think of another show that is more emblematic of what we aspire to be as a network than ‘Treme.’ In the tradition of ‘The Wire,’ David Simon and Eric Overmeyer have embarked on an exploration of the soul of one of the world’s most unique cities through the lives of an exquisitely crafted cast of characters. We are thrilled that the press has recognized the profound artistry and intelligence of this show and are eager to see where David and Eric take us in a second season.”

‪Set in New Orleans, "Treme" chronicles the lives of residents of the city rebuilding in the aftermath of Hurricane Katrina.

Simon and Overmyer created the series and executive produce it along with Nina K. Noble and Carolyn Strauss.

The series premiere drew 1.1 million viewers, a good but not great number for an HBO show, but critics raved about the drama. In Salon, Heather Havrilesky wrote, "[‘Treme’] epitomizes the sort of great storytelling we all thirst for on TV but rarely find," while Troy Patterson in Slate called the show "a rich and complicated portrait of the urban South."

Ratings alone, however, can be a deceptive metric for measuring a show’s value to a paid network like HBO.

Simon’s "The Wire" was ratings-challenged, but has had a profitable second life with reruns and DVD sales; it also just got picked up for a run on DirecTV’s The 101.

Moreover, some HBO duds such as "John From Cincinnati" debuted to strong ratings, 3.4 million in the case of the David Milch surfer drama, before flaming out, while current network tentpole "True Blood" drew a modest 1.4 million before building a passionate audience.