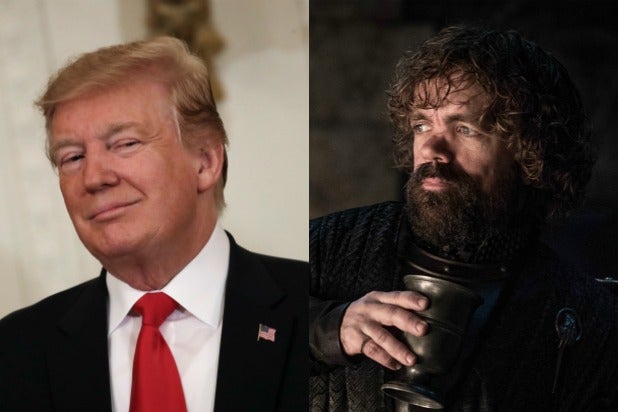 HBO has responded to President Donald Trump’s Thursday morning tweet regarding the Mueller Report on Russian meddling in the 2016 election, which made a clear reference to “Game of Thrones.”

“Though we can understand the enthusiasm for Game of Thrones now that the final season has arrived, we still prefer our intellectual property not be used for political purposes,” the pay-TV channel said in a statement.

Trump’s meme, seen below, features a shot of the president from behind with the text, “No collusion. No obstruction. For the haters and the radical left Democrats… Game Over.”

The font style that POTUS featured in the graphic is very clearly a copy of the well-known lettering HBO uses for the title of its epic fantasy series, which is currently airing its eighth and final season.

This is not the first time Trump has used “Game of Thrones” trademarking. Last November, he tweeted a “Sanctions are coming” meme regarding the reimposing of all U.S. sanctions on Iran, which had been lifted under the 2015 nuclear deal. The message was a direct reference to “GoT’s” iconic phrase, “Winter is coming.”

“We were not aware of this messaging and would prefer our trademark not be misappropriated for political purposes,” the network said in a statement at the time.