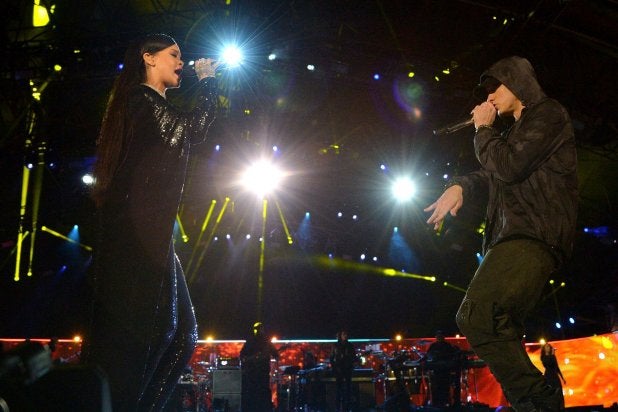 Veterans were repeatedly honored during Tuesday night’s HBO’s Veteran’s Day Concert for Valor on the National Mall by stars including Jennifer Hudson, Jamie Foxx, Meryl Streep and Steven Spielberg, but sometimes in language not intended for family television.

During the three-hour telecast  George Lopez once and Eminem four times interrupted the family-friendly message of helping to recognize the sacrifices of veterans with rousing calls to the audience.

“I know we can make more mother f***ing noise than that,” Lopez  said before introducing Carrie Underwood.

Eminem, initially singing with Rihanna, urged the crowd to “make some motherf-cking noise” for Rihanna and then used the f-word twice while performing and once more in asking for applause at the end of his set. He set the stage early, bellowing “Happy motherf-cking Veterans Day” when he first arrived on stage.

The colorful language distracted from a program that otherwise featured major stars either singing or talking about ways to help or recognize veterans.

Foxx initially promised the audience both in Washington and watching the three-hour broadcast aired nationally by HBO on both cable and on the Web that the concert would be an extraordinary night. HBO made their signal available to everyone for this special event.

“We just aren’t messing around here,” Foxx told the crowd.

His message didn’t take long to deliver, either. Within an hour the crowd had already seen Bruce Springsteen, The Zac Brown Band, Dave Grohl, Jessie J and The Black Keys all perform live, while John Oliver told a few jokes.

Oliver, HBO’s “Last Week Tonight” host, in his brief appearance suggested the crowd upon seeing him was most likely asking the question, “Who is this guy and when is the next band going to play,” before noting his wife is a veteran and his own passion for the troops. “It’s kind of staggering, the dislocation over the past decade between the civilian population and the military,” he said. “It offends me on a personal level.”

President Obama, in a taped message welcoming the crowd, urged them to seek out veterans. “Serve them as well as they have served us,” said Obama, who is traveling in Asia.

Streep, appearing live at the event,  noted she came from a family of veterans, including her father. “Valor is a powerful word,” she said, encouraging concert viewers to discover and support efforts to help veterans. Bryan Cranston and Bob Woodruff also made appearances at the event.

Among the night’s musical highlights was a joint rendition of  Creedence Clearwater Revival’s “Fortunate Son” by the Springsteen, Zac Brown and Dave Grohl. This came after Grohl and the Zac Brown Band each performed their own individual sets.

The night also featured a three-song set by Springsteen singing unusually somber versions of “The Promised Land,” “Born in the USA” and “Dancing in the Dark,.” as well as a head-banging set by Metallica, who was introduced by Jack Black as a “favorite of veterans.”

While both Lopez and Eminem used the colorful language, they also saluted veterans. Lopez urged viewers to help local veterans organizations. Eminem, who closed the show with his Oscar-winning anthem “Lose Yourself,” ended his set with a salute to veterans.

Tuesday’s concert was sponsored by HBO, Starbucks and Chase.