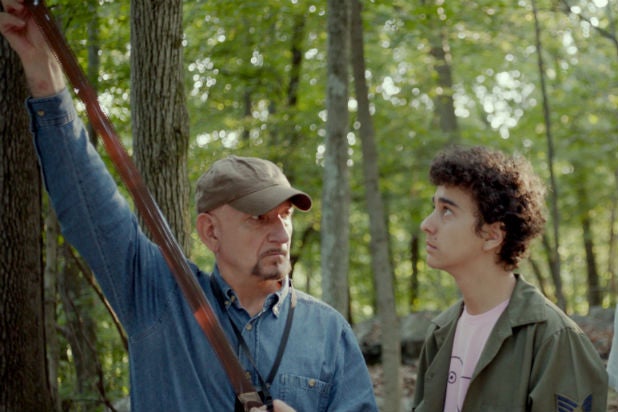 When people congratulate me on making a feature film, I’m always grateful.

I don’t underplay the accomplishment. Not because I think I’m special, but because I now know that getting a film (that lacks superheroes) made is a nearly-impossible dream that takes a huge amount of patience, endurance and ego-bruising. I was told this by pretty much everyone I knew before I started the process, but — like most people — I hoped I would be the exception to the rule.

So how did we get “A Birder’s Guide to Everything” off the ground? The first step was finding my producers, Dan Lindau and Paul Miller, who stuck with the project through years of development.

They brought on Avy Kaufman to cast (if you don’t know Avy, look her up. She’s the very best and has discovered all sorts of young actors). Avy scored our first big success by attaching Sir Ben Kingsley in the role of the birding mentor. Sir Ben Kinglsey!

I’ll always remember the moment I found out that Sir Ben was attached. I immediately called Luke Matheny, my writing partner, and we both had the same reaction: “Holy shit — of course this will ultimately fall through — but we’ll always be able to say that ‘we wrote a script that Ben Kingsley at one point attached himself to!'” We were pretty skeptical by this point.

Another much-needed boost came in the form of a Columbus/Vague Award from NYU (supported by Chris Columbus and Richard Vague). The Sundance Institute then awarded the script a Sloan Fellowship – which came with some funding and a week of refining and shopping the script around at Sundance in 2010. And the next year, the Tribeca Film Institute gave it another fellowship from Sloan – some more money, some more momentum.

Finally, we were able to get our budget down to a reasonable level – low enough to shoot the film non-union and with a SAG-modified low budget. Between a few investors (whose loyalty I will forever be in debt to), some additional producers from Texas (Lisa Jenkins and Kirsten Fuller), the New York State tax credit, and the grants from Sloan and NYU, we were within striking distance of having our budget in place. With Sir Ben Kinglsey confirmed for our shoot dates, we were able to find the last pieces of financing right before shooting started. We were finally a train leaving the station — not a train we were trying to push from a stop.

So that’s the somewhat boring story of how we got the project financed, which was honestly the hardest part. Making the film itself, however, was wonderful…

Crucially, Avy found us an incredible cast. Ben Kingsley, of course, was an enormous score. But we also were blessed with James Le Gros, a fantastic and versatile actor who brought his incredible, low-key-yet-intense style to the challenging role of the father. And we found the kids; this was the part I was really looking forward to.

Led by the oozing-with-talent Kodi Smit-McPhee (who Avy had cast in “Let Me In”), the others matched up perfectly – Alex Wolff, Michael Chen, and Katie Chang. While we were casting, I printed out stills from their auditions and made little cards of them. “I just like these kids!” I kept saying, looking at them all together. I knew we were going to have a very tight shooting schedule – 20 days – so I wanted actors who already had film experience. Alex had years on sets shooting “The Naked Brother’s Band,” and had recently played the lead in the feature, “HairBrained.” Katie had just made “The Bling Ring” and Michael was in the wonderful film, “Children of Invention.”

My approach to working with the young actors was pretty simple: Trust them.

These were smart, dynamic teenagers — not little kids — so I knew they would rise to the occasion and have great ideas and instincts. And I wanted them to feel safe to take chances and be spontaneous – a lot of the best beats in the film were actually improvised. Probably the one thing I wish I could have done differently was to spend more time letting them explore new ideas, but 20 shooting days, especially 8-9 hour days (because of the age of the actors), is a breakneck pace. It really made me appreciate that I had 10 long days to shoot my 15-minute short.

Working with Sir Ben was mind-blowing. The day he arrived, I was pretty intimidated – I’d only met with him a few times before the shoot and he’s a hero of mine. I think it took him a few moments to adjust to the scale and somewhat scrappy style of our production (we actually weren’t all that scrappy, but he was coming off “Iron Man 3”). But I think he quickly realized he was in excellent hands (especially when it came to our amazing DP, Tom Richmond) and he was an absolute pleasure to work with.

He came to set incredibly prepared, with a highly-detailed backstory for his character. On set, he would always be looking for props, moments, or happy accidents to motivate something interesting. He was character-driven, with an amazing understanding of the dance that actors partake in with the camera — the lighting, the set, and, of course, each other. And it was a pleasure to watch Sir Ben collaborate with Kodi, who, though obviously much younger, has a similar combination of intensity and sensitivity.

I got incredibly lucky with my crew. My DP, Tom Richmond, has shot so many of my favorite indies – from “Stand and Deliver” to “Nick and Nora’s Infinite Playlist.” He really brought out the best in my own work and I always felt he was my partner in crime.

Tom also brought a camera, lighting and grip team populated by young, passionate people who were devoted to him and would always go the extra distance. My production designer, Elizabeth Jones, and her crew were spectacular. I was amazed to find people who cared more about the production design of my film that even I did, and who worked like maniacs to make every idea happen on a very limited budget. Same goes for my costume designer, Annie Perinne, who poured so much love into the project, along with all of the department heads.

This is why I wanted to make films in the first place; it’s what made the years of development worth it. There’s nothing more exciting than leading a team, every member of which is the best at what they do, and working with actors who deliver honest and compelling performances. Every day felt like impossible odds: By lunchtime, we had no idea how we could possibly still make the day, and every day we did.

I loved every minute of the shoot. To say it was “fun” would probably be a bit of a misrepresentation – I was always keenly aware of how little time we had and how finely we were cutting it with coverage. But witnessing the impossible happen – the weather cooperating, the camera finding the right spot and the right time, the actors making brilliant and surprising decisions – those were moments that fueled the adrenaline high of directing a film and are why I’m ready to do it all over again.

BIO Rob Meyer
Rob Meyer’s first feature, “A Birder’s Guide to Everything”, starring Kodi Smit-McPhee and Ben Kinglsey, is a coming-of-age comedy about a teenage birder struggling with the recent loss of his mother. Co-written by Oscar-winner Luke Matheny, it was based on his short film, “Aquarium,” starring Jeremy Allen White (“Shameless”), which played at over 60 film festivals and won over 20 awards, including an Honorable Mention at Sundance. Rob, who currently helms the production company There We Go Films, is based in New York City and received his MFA from NYU’s graduate film school. Prior to NYU, Rob worked at PBS’s NOVA, HBO Documentary Films, and National Geographic, helping to produce Peabody and Emmy-award winning documentaries around the world. He is an avid violinist and loves the natural world.

Rob Meyer’s first feature, “A Birder’s Guide to Everything”, starring Kodi Smit-McPhee and Ben Kinglsey, is a coming-of-age comedy about a teenage birder struggling with the recent loss of his mother. Co-written by Oscar-winner Luke Matheny, it was based on his short film, “Aquarium,” starring Jeremy Allen White (“Shameless”), which played at over 60 film festivals and won over 20 awards, including an Honorable Mention at Sundance. Rob, who currently helms the production company There We Go Films, is based in New York City and received his MFA from NYU’s graduate film school. Prior to NYU, Rob worked at PBS’s NOVA, HBO Documentary Films, and National Geographic, helping to produce Peabody and Emmy-award winning documentaries around the world. He is an avid violinist and loves the natural world.