Don’t be diverted by the sleek clothes, vibrant colors or transformative work of its lead actors — the crown jewel in the medusa head of “American Crime Story: Versace” is newcomer Cody Fern.

From a small mining town in Australia, with only one prior credit to his name, Fern plays the little-known David Madson — a pawn in the game of serial killer Andrew Cunanan, who famously gunned down designer Gianni Versace in Miami in 1997.

That Fern would stand out with his famous costars Penelope Cruz, Edgar Ramirez and Darren Criss is as unlikely as it is exhilarating. His performance as Madson is the show’s true revelation, despite the halo Ramirez brings Gianni, the quiet dignity Cruz affords Donatella and the textured madness Criss gives us as Cunanan.

Let us explain. (Warning: Do not read ahead if you aren’t caught up on the show.)

“Versace,” produced by Ryan Murphy and his “People v. O.J.” team of Brad Simpson and Nina Jacobson, shows Cunanan’s five-person murder spree in reverse. It hooks you with the spectacle and tragedy of Versace’s murder on the marble steps of his palazzo and walks you back through Cunanan’s horrible journey to that moment.

On this timeline, we meet his victims and friends Madson and Jeff Trail (Finn Wittrock). At the top of the fourth episode, we witness Fern’s big moment: Cunanan violently bashes Trail in the skull and face 28 times with a hammer.

The violence is implicit and the camera doesn’t show the murder, just a slow push on Fern. He conveys abject horror and shock at the act unfolding in front of him. Only after the screams and grunts are through do we see a blood-soaked Cunanan, who immediately retreats into the arms of the terrified Fern, looking for approval.

Madson had a dog, and the animal used in the scene had such a strong reaction that the actors had to do a second take, Jacobson told TheWrap.

“The intensity of that murder was present there at the shoot,” she said. “What’s so great about Cody’s performance is that the horror of the murder is playing out across him.”

After the murder, Cunanan seizes on the violence and confusion to make Madson feel complicit. He pulls him into the shower and washes the blood from them both. He watches as Madson dresses and struggles to find an appropriate response to the crime he’s just witnessed.

Cunanan promises no one else will get hurt if Madson flees the scene with him, so the men set off together on a morbid little road trip. Here they both begin to weigh the consequences of their choices.

“We watched a lot of road movies from the 1990s, there was this trend of road movies. ‘Natural Born Kilers,’ ‘Wild at Heart,’ ‘Thelma and Louise.’ [Episode writer] Tom Rob Smith watched those, and we talked about this being a twisted version of that,” Simpson told TheWrap.

Indeed, Cunanan joyously belts out Technotronic’s “Pump Up The Jam” while Madson stares off into the distance, drudging up his internalized shame over being gay, and wondering how news of the crime will hurt his family, which struggled with his coming out, years before. 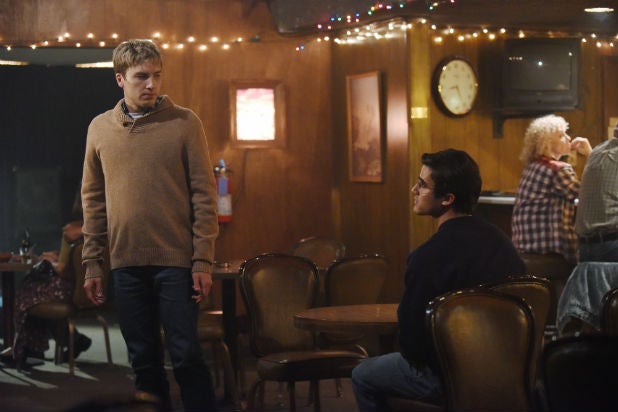 “The question becomes, ‘How redeemable is Andrew and how redeemable am I?” Fern said of the episode, speaking from the set of his new gig on “House of Cards.” “How complicit am I in the death of this other person, my best friend? Could I run now if I wanted to?”

To prepare for the episode, Fern said he read the famous testimony of Manson Family member Linda Kasabian, a key witness in the defense of the Tate-LaBianca murders.

“You got the sense that the light went out behind her eyes, ” Fern said.

The episode reaches a second crescendo when the fugitives stop at a roadside bar. Fern’s Madson keeps reaching the end of his emotional rope, only to find more rope. A lounge lizard (played by indie goddess Amie Mann in a stealth cameo) sings an impossibly sad cover of The Cars song’ “Drive.”

Madson escapes to the bathroom, where he breaks the glass of a small rectangular window above the toilet — “Maybe he fits through it, maybe he doesn’t,” Jacobson said.

Back in the bar, reality rushes to Cunanan and tears stream down his face.

When he looks up, Madson has returned to the table. The sweater he wrapped around his fist to punch the window is now tied on his waist.

“The shame, it’s something we wanted to explore in this entire season. Think about Versace. He came out before Ellen, and there were so few role models and people you could look up to. There was so much internalized homophobia, it’s so present with both of those characters, both Madson and Jeff,” Jacobson said.

“It’s more than the murder for Madson. It’s ‘People know you’re guilty for being gay, and guilty of being gay.’ That Cunanan plays on that is so disturbing,” Simpson said.

Tom Rob Smith’s teleplay for the episode is titled “House by the Lake.” That’s where the episode ends, and we won’t spoil what fate awaits the men there.