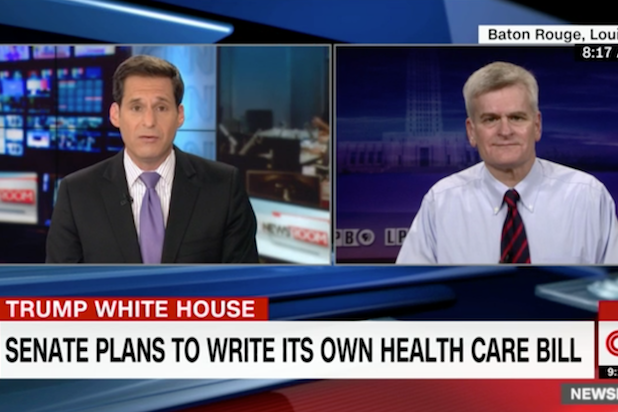 Senator Bill Cassidy has a new way of making sure a health care plan is up to snuff: It has to pass, as he put it, “the Jimmy Kimmel test.”

Asked whether he could support a bill that allows insurance companies to cap their payments, the Louisiana Republican coined his own phrase to describe his new litmus test.

“I ask, does it pass the Jimmy Kimmel test,” Cassidy, who is a physician, told CNN’s John Berman on Friday. “Would the child born with a congenital heart disease be able to get everything she or he would need in that first year of life … even if they go over a certain amount?”

On Monday, Kimmel delivered an emotional plea for affordable health care after his newborn son, Billy, was born with a serious heart defect. Kimmel then went on to defend Obamacare, telling viewers that no parent should have to be in a situation where they can’t afford to save their children. Choking back tears, Kimmel insisted that health care should not be a partisan issue.

The House of Representatives narrowly passed a new bill Thursday aimed at overhauling the nation’s health care system. The measure now heads to the Senate where it is likely to face an uphill battle and substantial changes.

Cassidy insisted the Senate will address concerns, like the ones brought up by Kimmel, and touted his own health care plan, a partial replacement of the Affordable Care Act, which would allow states to continue operating under the law if they choose.

He said his bill would cover people with pre-existing conditions by “expanding the risk pool so that those who are sicker, if you will, are in a pool of those who are younger and healthier.”

His plan, he said, would definitely pass the Kimmel test.